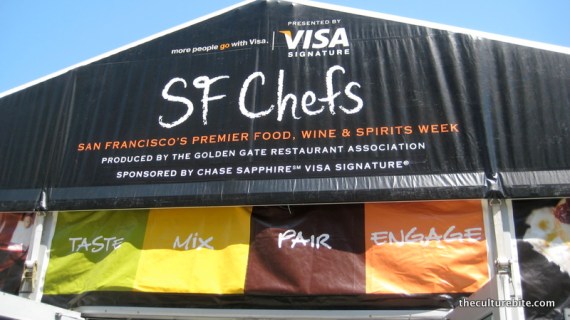 San Francisco Chefs 2011 is an over the top feast. And if you think you can’t get full from small bites, you’ll have to come to this food festival. There are so many great chefs cooking great food. You can’t say no.   The brochure suggests you’ll mingle with master chefs, mixologists, wine makers, brewers and culinary superstars. And that’s an understatement. Our first stop after entering the Great White Tent on Union Square was the Epic Roasthouse station. What a way to start.  It was a charcuterie heaven!  Thin slices of deliciously cured meats. The duck prosciotto with a ruffled edge of fat had nice dried cured taste and it’s surprisingly very similar to Chinese cured duck (lop op to you Cantonese).  The meats were showcased on a wooden platter of beautifully prepared slices of rabbit, corned beef,  smokey pork terrine, and porchetta. The meats were the stars but the support cast consisted of an assortment of crispy, pickled veggies. So delicious that we wanted to take home a jar. 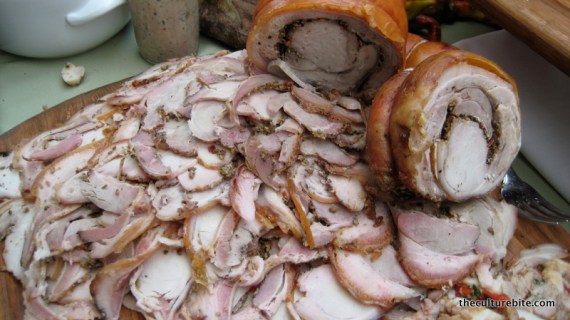 While one of us waited in Epic’s food  line, the other headed to Delfina’s station and quickly snagged a serving of cucumber salad and tripe.  The chef said the tripe was the “second stomach”. I don’t know what that means but this tripe was different than any we’ve ever tasted. It was crispy, lightly seasoned with lime and olive oil and some other chef’s secret. It was topped with a sprinkle of sea salt.  Yum! I’m not a fan of cucumbers but if I could get the recipe for that salad I definitely would be a convert. 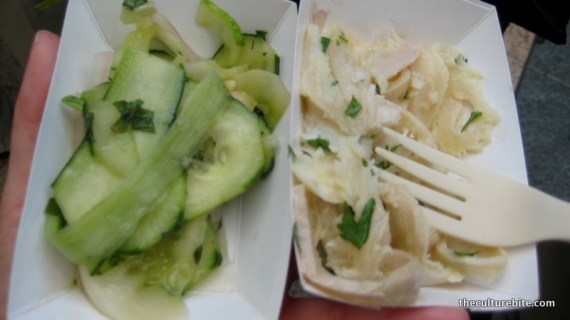 We then moved on to another station run by Perbacco.    It’s melon salad is everything we love about California’s seasonal fruits and veggies. It’s called Lardo Reale Pressed Melon salad. The fruit chunks looked like jewels, almost too pretty to eat.   The crispy melons were sprinkled with black pepper and jalapenos.  It was both sharp, sweet, peppery, with a kick but still refreshingly cool  A perfect finish or a start to any meal. 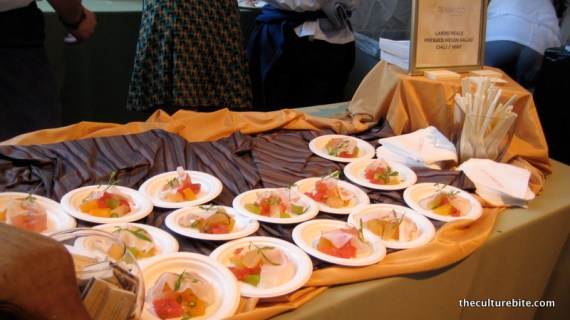 One of the favorites of the day was a cold corn soup with smoked chanterelles.  The corn was definitely fresh off the cob.  The soup had a sweet, crispy crunch with a smoky flavor. 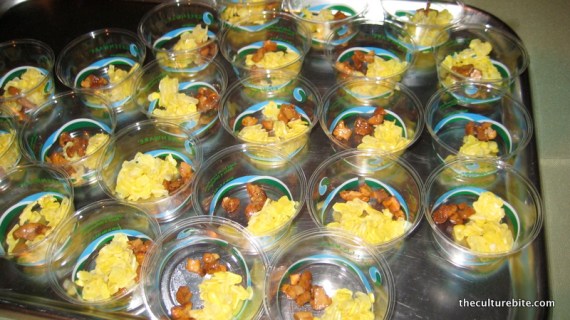 We moved on to the Fleur De Lys station.  Hubert Keller was there serving the most delicious summer soup I’ve tasted: Chilled avocado and tomato gazpacho with cilantro topped with crab meat.  The combination describes itself. 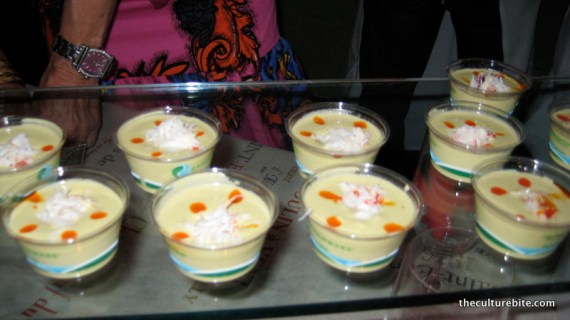 At this point, we were saying, “no more!”  But we didn’t give up.  The soup was a pre-cursor to the Burger Bar station.  We were hoping for hamburgers. But to our surprise, they were serving up burger desserts.  Using cream cheese and Nutella, these were little bites of heavenly goodness.  We couldn’t eat anymore so we split the pineapple moousse burger bite.  Definitely a guilty pleasure.  And  I even felt guilty not trying the Nutella burger. 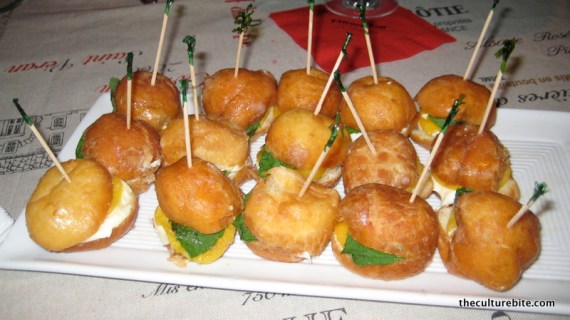 Notes on other delicious tastes:  Pizza Antica’s Tomato Pancetta Braised Pork Cheeks, with Creamy Corn.  Persian Lamb tacos made with potatos, tomatoes,  garbanzo and herbs. I wish I could remember which station because it’s definitely a dish I’d love to have for dinner.   On the way out we eyed the Halibut cheeks, tempting but we literally could not eat another bite. 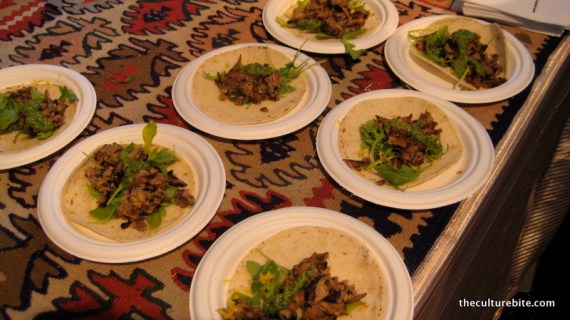 Bacchanalia is the one word to describe this event. 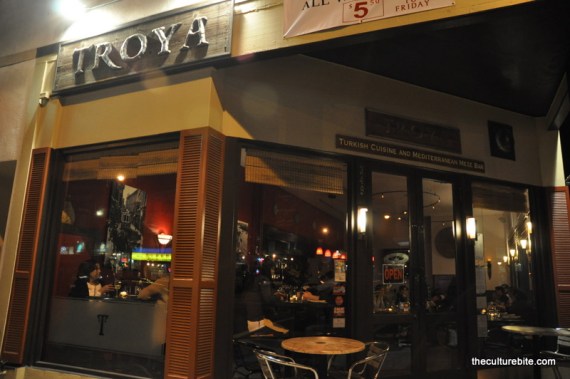 It’s been a while since I’ve given a restaurant 5 clubs. And Troya, an authentic Turkish restaurant in the Inner Richmond, completely deserves a perfect score. Troya is a cute little restaurant on the corner of 4th and Clement. Dark ambiance, candles on every table – such a cute place for a date night.

We started with two appetizers – flat bread topped with ground lamb and spices and super moist crab cakes. Both were amazing, especially the flat bread. Smoky, earthy… with a hint of cumin. Boy, I could eat that flat bread every day if I knew how to make it. 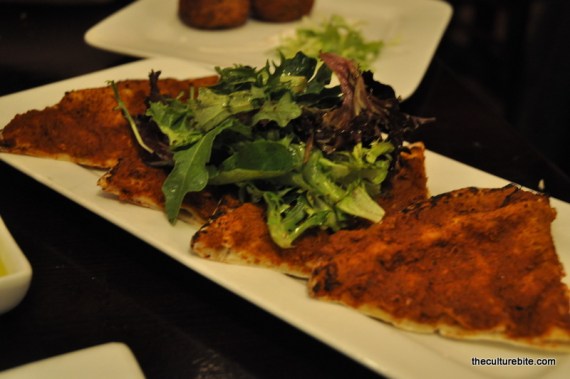 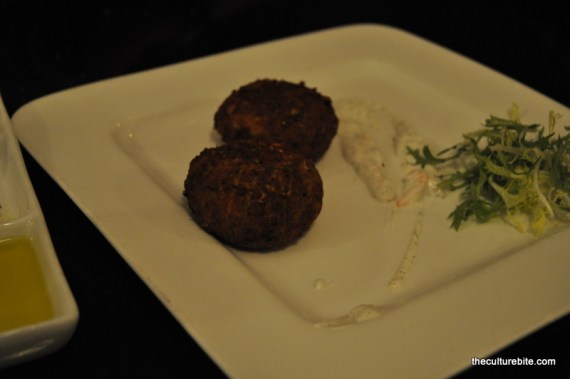 Now it’s time for kebabs. I had the kofte kebabs (lamb meatballs). Oh it was so delicious. So tender and juicy. Each meatball exploded with flavor with each bite. Dip it in the hot sauce for some serious heat. K’s lamb cube skewers were just as tasty. For such tiny pieces, each was cooked perfectly tender. And they were lean! Major plus. 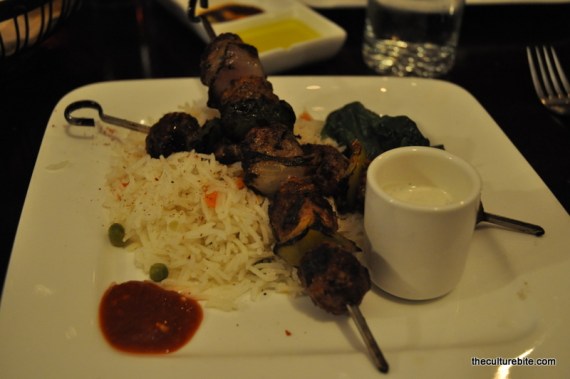 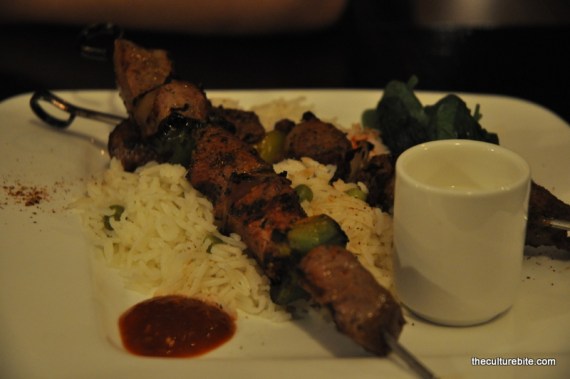 As if the meal couldn’t get any better, we had dessert. K and I shared the kunefe, shredded phyllo dough (kadayif) wrapped around a soft cake-like cheese topped with a simple syrup and crushed pistachios. The crunchy dough resembled crispy noodles and the center was warm and gooey. We were so full from dinner, I was surprised when we devoured the dessert and licked the plate clean in seconds. 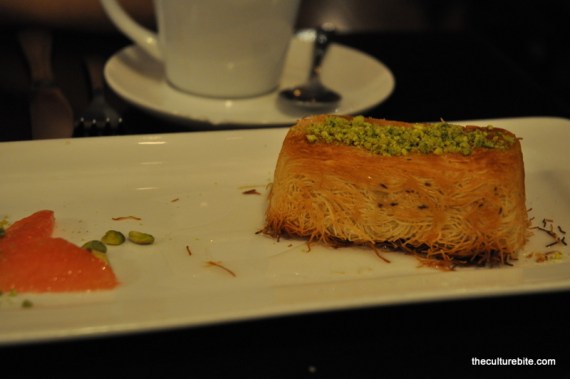 As if you couldn’t tell, I thoroughly enjoyed this meal. The meal, the service and the price – the entire experience was perfect. I just can’t wait to come back!

A friend at Willams Sonoma just tipped us off to a farmers market they are setting up for Wednesday.  Well, what are you waiting for?  The forecast shows that it will be sunny, and well, we all need to go out and stretch our legs.  Many of you will be wondering where Icehouse alley is: “ICEHOUSE ALLEY, on Green Street and on Union Street west of Battery Street, east of Telegraph Hill.” – Forgotten NY

A letter from a friend at Williams Sonoma:

Spring has sprung! Get out of your chair, step away from your computer, and come down to the Ice House Alley Farmers Market. Come try something new, get some fresh air, catch up with old friends, and make some new ones. Our goal is to make sustainability simple, tangible, and fun. Remember: bring some green because these vendors are cash-only.
Hapa Ramen, Tacolicious, Piperade, El Porteno Empanadas, and CoraCao Confections.
Please feel free to invite your co-workers!

We hope to see you! 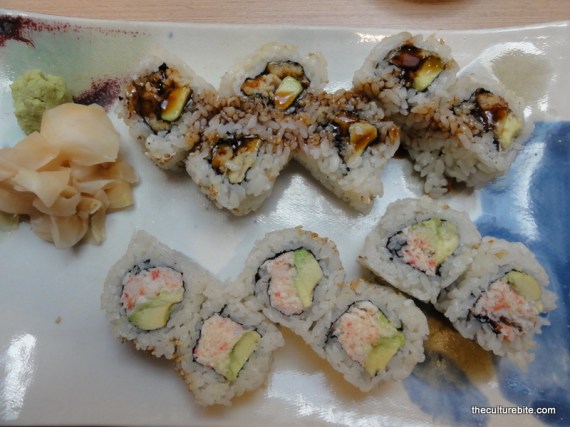 Blegh! I will never use Urban Spoon again because it recommended this restaurant. Food wasn’t fresh, service was bad, and dishes were dirty! Is it really that bad? Well, I found some food particles in my cup of water and I asked the waitress to get me a new cup (nicely). Instead of doing so right away, the waitress picked up the cup and inspected the glass of water! It was as if she didn’t believe me!

Well, nothing really stood out on the menu, so K and I got the sushi combos. It came with a salad which was probably the worst Japanese salad I’ve ever had. All other Japanese salads are light and refreshing with a sweet miso dressing. This one left a powder residue in my mouth like it was an old, just-add-water type of dressing. 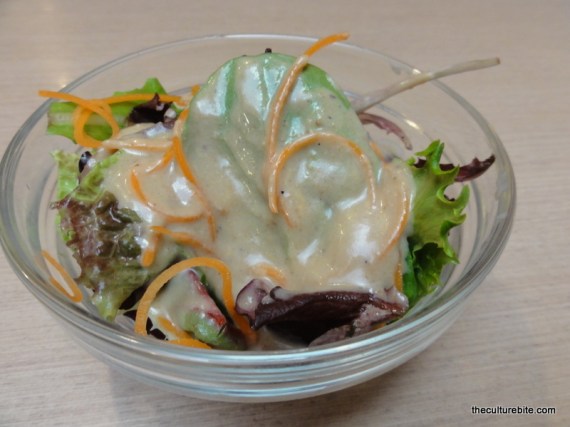 I had the spicy tuna and the California roll. I can’t eat wasabi, so I checked with the waitress to see if they used wasabi in their spicy tuna. She said “no,” but when I took my first bite, all I could taste was wasabi! I couldn’t eat it after that, so I made K eat it for me while I ate his eel roll. 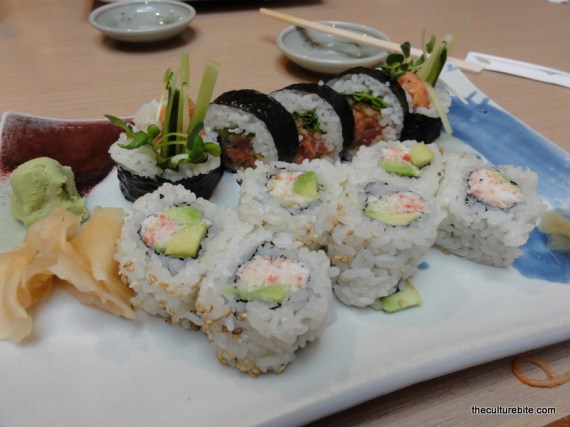 The empty restaurant should’ve been a sign, but I stepped in anyway. I recommend Sushi Sam in San Mateo or Sushi Zone in the Castro if you want some fresh sushi. 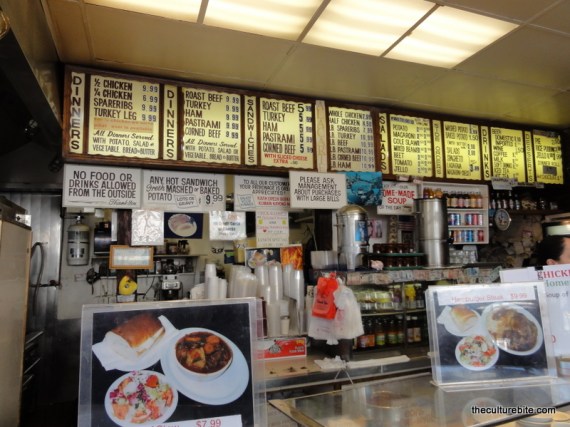 I’ve been driving past Chick-N-Coops around the city for years and I’ve never got myself to try it until recently. I have to say, it was really fun! My dad comes all the time for lunch, so he took K and I to introduce us. Walking into the hoffbrau was like walking into a time warp. The customers, the employees, the decor – it felt like nothing in the restaurant has changed in the last 40 years.

I got the corned beef sandwich “wet” on a roll. Wet means au jus on the bread, nothing else. So simple but so very tasty. The roll is so soft and chewy, a perfect match for the briny corned beef.  This also passed the day after test. 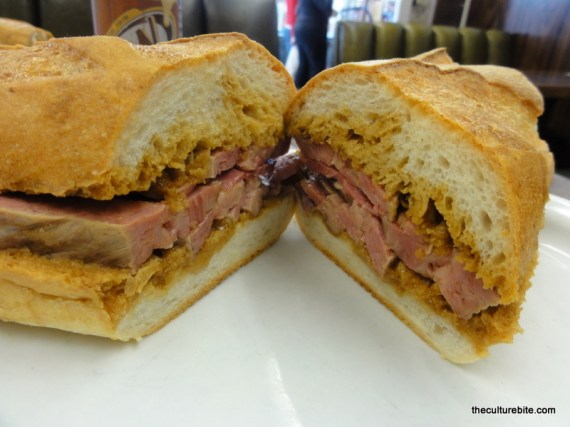 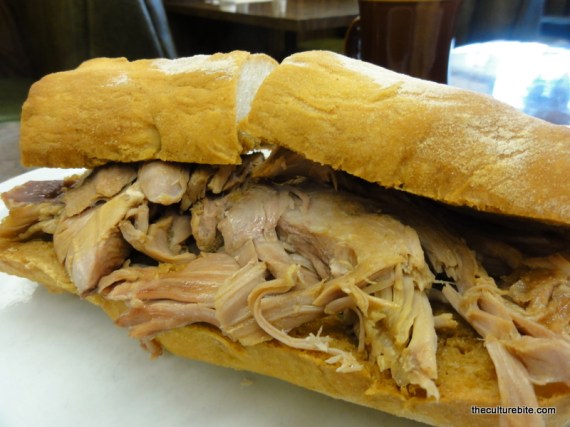 And, K got the wet pastrami sandwich. We all agreed the corned beef and the turkey were the winners of lunch. 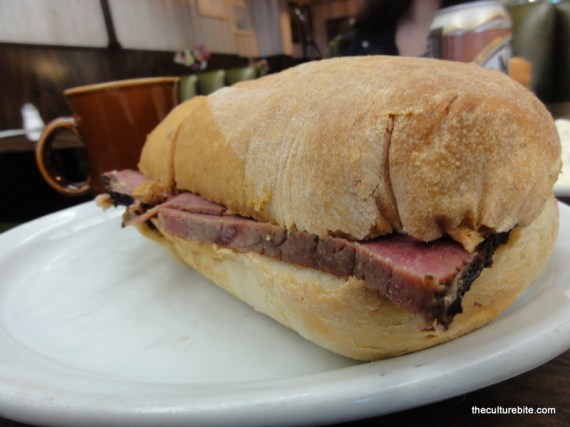 We got the cole slaw as a side, but I wasn’t a fan. Too watery and too much mustard. 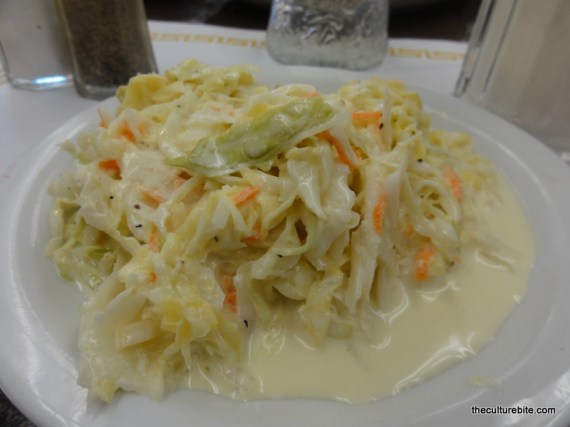 Chick-N-Coop was a fun adventure and I’d definitely come back again for the wet corned beef sandwich.