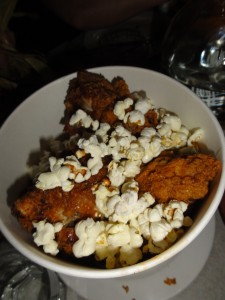 Thanks to my mom, my dad was this close to cooking a prime rib for his own Father’s Day dinner. My bro and I couldn’t have that so we made reservations at Front Porch for some fried chicken and bread pudding. I’ve never even heard of Front Porch until my sister-in-law suggested we go there, but let me say this… I’ve never been more full at a meal out than I have here at Front Porch.

The restaurant/bar is uber hipster. It may say “not good for children” on its Yelp page, but we found it to be fine for the kids. Given, you sit right next to a bar, but the restaurant is so noisy, it doesn’t matter if the children cause a fuss.

I imagined the service to be a bit snooty like Emmy’s Spaghetti Shack, another hipster joint in Bernal Heights. But, our waitress was very friendly! She recommended her favorite dishes and even joked around with my littleÂ nieceÂ and nephew.

We completely over-ordered, but that’s okay! Leftovers! Not only because you can eat it again, but also because you get to take home cute little take-out boxes ranging from a movie theater popcorn container or a Chinese take-out box.

Biscuits for Boobies – Had to order these because of the name. Hehe. These buttermilk biscuits were dense and fluffy, and the best part is… all profits go to the fight against breast cancer. I’d suggest not to go overboard with these because each customer gets a free basket of cornbread.

Grilled Cajun Corn – This was soooo good. The juicy corn is grilled with Cajun butter and seasonings in the husk for that smoky flavor.

Fried Chicken – It’s been proven… fried chicken at Front Porch passes the day-after test. The meat is incredibly juicy, the liquid just pours out of the chicken with each bite. As far as seasonings, it tasted like all it had was a sprinkle of salt. The waitress informed us that the chicken is supposed to be pure and plain. And, if we wanted a kick, douse one of their hot sauces over the chicken. The bucket of fried chicken is also tossed with popcorn. I’m not sure if it has a purpose, but it’s fun to snack on in between pieces.

Shrimp and Grits – I had been craving this a whole week before we decided on going to Front Porch. That’s how excited I was to order this. You’ll find shrimp and grits on the appetizer menu, but you can order a full plate version for $18. I was a little underwhelmed by the taste though. It was way too salty for my liking. I excused my complaint, though, because proceeds from that dish went to The Gulf Coast Oil Spill Fund.

Mashed Potatoes and Collard Greens – The mashed potatoes were thick and creamy. I’ve never been a real fan of collard greens before because of the tough, leathery texture, but these were so tender.

Desserts – Our eyes were way too big for our stomachs. We had 4 deserts between 6 adults. I believe the serving size for each dessert is 4.

Bread Pudding – By far, the best bread pudding I’ve ever had. They use a meaty brioche soaked in chocolate sauce and topped with a caramel praline ice cream.

Key Lime Pie – Again, another good one. Some key lime pies are light on the filling, but not this one! It had a perfect blend of sweetness and tartness. It was also topped with a meringue rather than a whipped topping. Yum!

Cherry Pie – This is actually a whole mini pie, and my bro ate the whole thing. It was another play on the sweet and tart. Can’t go wrong with that.

Beignets – Best for last. These fluffy, chewy beignets were topped with a chocolate sauce and powdered sugar. It was just like eating warm Nudder Butter (chocolate/peanut butter/powdered sugar Chex mix). The only thing missing from these beignets was the peanut butter.

I’m definitely coming back to get the fried chicken and the beignets. Or maybe the bread pudding? Or the key lime pie? Ah, I can’t decide!!