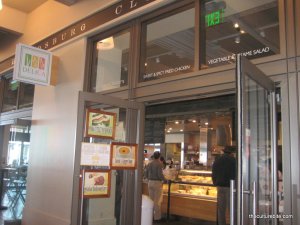 I’ve always avoided this place in the Ferry Building because I once tried a sample of the carrot ginger soup and I almost gagged. I’m no fan of ginger.

So, last week L and I were having a long internal debate on where to eat and chose Delica because it had the shortest line.

Much like every other store in the Ferry Building, Delica was fancy. They’ve got 2 lines out the door – one for salads and one for hot foods. We automatically got into the hot food line not knowing the difference. Each of the food items are on display behind a glass case that stretched throughout the entire restaurant. Items such as chicken dumplings, tonkatsu, tempura, and other fried items as well as ginger kobe beef rice bowls, bento boxes, sushi and salads.

I totally was not craving anything hot because it was such a beautiful day in the city, but I went for the veggie curry.

Veggie Mushroom Curry – Oh my GOD it was good! It was the best Japanese curry I’ve ever had. It was very hot, creamy and… crunchy? Yes! The curry was topped with thinly sliced lotus roots that were fried so they have the texture of chips. The two types of mushrooms used in the curry were button and oyter. The taste of the dish as a whole was so unusally satisfying. I’ve never had any other curry like it. It seriously beats Muracci’s and Hotei out of the water. 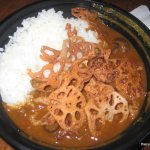 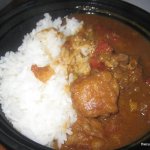 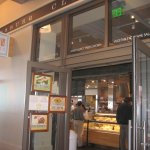