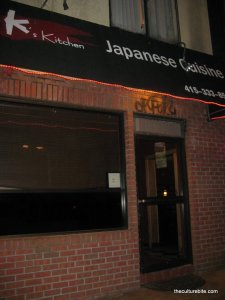 Now that my parents are out of town, I have to fend for myself to eat. Poor me, right?Â  So, after work, K and I did a quick Yelp check and found Kâ€™s Kitchen just down the street from my house. Japanese? Sure, why not.

To my surprise, it was way more expensive than I thought it would be. EntrÃ©es ranged from $10-$20 and sushi was about $7-$15 for 4-8 pieces. I figured they had to charge that amount due to the location. Monterey Blvd. isnâ€™t really known to be a foodie hangout. Overall, the entire meal was pretty underwhelming.

Kâ€™s Kitchen is a discrete Japanese restaurant with a trendy/modern interior. You can easily drive by it without even noticing the storefront. There were maybe 6 or 7 tables already seated in the restaurant and the first thing I noticed was that the clientele was all Caucasian. Therefore, leaving me skeptical because most Asian people know their Japanese food.

At $9 for a specialty maki roll, it was probably the smallest sushi Iâ€™ve ever seen at an inch in diameter. I do admit the presentation for each dish was beautiful. A+ for plating for sure.

We ordered the Seared Sea Bass and the Udon with Chicken Broth. What sucks about ordering a noodle soup is that every time I get it, I always feel left out when everyone else gets a side salad, miso soup and green tea ice cream. Boo!

Seared Sea Bass â€“ This dish featured 2 thin slices of seared sea bass in a sweet miso sauce with crispy fried onions and a bowl of white rice. K ordered this and wasnâ€™t feeling it. The fish was a little overcooked and it tasted pretty fishy.

Udon w/Chicken Broth â€“ This was the most unusual udon Iâ€™ve ever had. It didnâ€™t come with the light seaweed broth with fish cakes and furikake like Iâ€™m used to. I had the option to pick a miso broth or chicken broth and I went with the latter since it seemed healthier. The noodle soup was very sterile. There were only noodles, broth, seaweed, and a few enoki mushroom strands for garnish.Â  I wouldâ€™ve appreciated a few pieces of tofu in the soup, maybe chicken even since I ordered chicken broth. I think homemade udon wouldâ€™ve been a nice touch since they make their own broth. Overall, good flavor, but lacking in other areas.

I doubt Iâ€™ll be coming back here again. There are much better Japanese restaurants in the city at a cheaper cost.