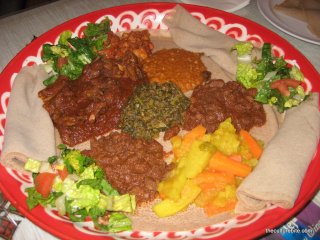 Thursday I had the pleasure of experiencing Ethiopian food at Cafe Ethiopia in SF’s Mission district. I’ve always been curious about Ethiopian food since I had no idea what it’d be similar to. I’ve since learned Ethiopian food is much like Indian food, but instead of curries, they eat stews, called wat. Their bread, known as ingera, is like a light and sour naan with a sponge-like consistency. It is proper to break off a piece of ingera and dip it in the wat, using only one hand. The flavors I experienced were nothing like I’ve ever eaten.

“Dining in Ethiopia is characterized by the ritual of breaking Ingera and eating from the same plate, signifying the bonds of loyalty and friendship.

Ingera, the traditional Ethiopian bread is made of finely ground Teff flour (baked from fermented, truly natural contains no fat or preservatives). Ingera is slightly sour pancake like bread upon which the various stew-like dishes is served.

Tsebhi (Wat), which is a stew-like dish, comes in a variety of forms-beef, lamb, chicken or vegetables seasoned with a peppery sauce known as berbere (berbere-a typical Ethiopian red pepper).

The traditional way of eating is with the fingers, which is in itself a delicate art. In this manner, a bite-sized piece of Ingera is broken off to pick up a mouthful of the chosen dish. Usually accompanying the meal is Tejj (honey wine), a wine made from fermented honey.”

We actually had our waitress order whatever she wanted for us. Daring choice, but I have no regrets. The total cost came out to $41 for 3 people.

Lamb Tsebhi Begee (Yebeg Wat) – Tender lamb with bones cooked with hot pepper and seasoning. Although not as spicy as I would’ve liked, the meat was tender and juicy.

Meat & Vegetarian (Choose two meat and one vegetarian) – We got the Zigni (Kay Wat) (chunks of lean beef simmered in spicy sauce & seasoning), Tibsie Derho (sautÃ©ed chicken pieces with fresh, tomatoes, onions served hot or mild), and Kustta (chopped fresh chard with potatoes and seasoned). The beef was my favorite dish of the night. It had interesting flavors and was very lean.

Ater (kik Wat) – Split peas flavored with berbere sauce. I really liked this one. The split peas were more like a pallette cleanser between meat dishes. The texture was smooth and creamy and it had a hint of spice in the after taste.