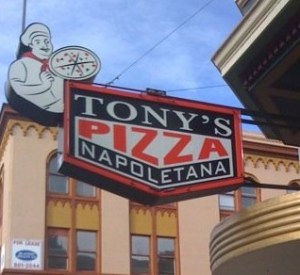 Tony’s Pizza Napoletana is by far the best pizza joint in the Bay Area, possibly the world. Gasp! Why do I say that about a restaurant in San Francisco? In 2007, Tony Gemignan, owner of the pizzeria, won numerous awards at the World Pizza Cup in Naples, Italy (yes, the birthplace of pizza!) including the most coveted Best Pizza Margherita category.

I went to this place twice in one weekend and ordered different pizzas both times. What I like about his menu is that he features different variations of pies – American, Italiano, Romano, Sicilian – each of which are prepared in different ovens and all equally delicious. When you go to this restaurant, you MUST order the Margherita pizza. It cooks in less than 5 minutes and is both gooey and crispy at the same time. They only make 73 Margherita pies a day, so get here early before they run out.

Margherita – Light and crisp. The sauce is smooth and the fresh mozzarella is melted just enough to leave that delicious string of cheese hanging from your mouth. 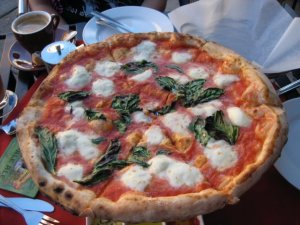 Cal Italia – Decided to order this because it was different. This pizza is topped with a fig puree, prosciutto and shaved parmesan. It’s sweet – can almost be considered a dessert pizza – but, the prosciutto balanced the flavors making this perfectly okay to eat as an entree. 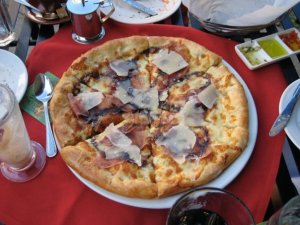 Butternut Squash Pizza – This was a special of the day, which means they, unfortunately, do not serve it all the time. This one was probably my favorite pizza of the bunch. Instead of the usual tomato sauce, this one is topped with a squash puree, topped with mozzarella, gorgonzola, grilled zucchini and panchetta. This, too, had the same balance of sweet and salty, but the combination of cheeses is what won me over. 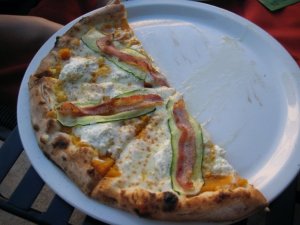 The Original Tomato Pie – Had this on my second trip. Totally forgot to take pictures, but this too was delish. This pizza is under the Classic American category which features pies of thicker crusts. It was a basic sauce and cheese pizza, but tasted anything but ordinary.

Scarola con Pancetta – To be honest, I was kind of disappointed our table ordered this one, but boy, was I impressed after my first bite. Topped with Mozzarella, Pancetta, Peppered Goat Cheese, Escarole and Sweet Piquante Peppers, the mix of crunchy escarole and warm creamy goat cheese is what won me over.