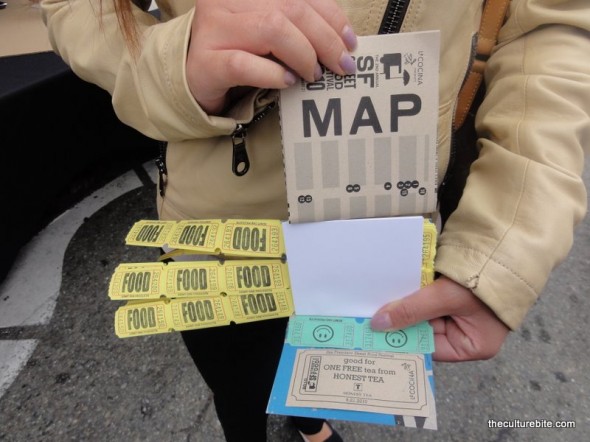 I’m so glad I made it to the SF Street Food Fest in the Mission on Aug 21st. Here I was able to try most of every food truck in the Bay Area I’ve always wanted to try such as Lumpia Cart, Curry Up Now and Hapa Ramen. The one-day event was Ã¼ber packed and vendors were selling out left and right. Each vendor (mix of food trucks, restaurant stands, and suppliers) offered 3 items – a small bite, bigger bite and a drink. I pre-purchased a $75 pass with 3 other friends which allotted us $75 worth of food and 2 free drinks. If I had known I could’ve purchased items a la carte the day of, I totally would’ve gone that route as it was painful to eat that much food.

I was pretty underwhelmed with the event as a whole. There was no single item I absolutely fell in love with – a few good finds, but a lot of flops. I’m wondering if it was because the food carts were not use to making food in such large batches. I came really early so I didn’t hit really long lines, but when I left the event got really crowded. A few friends that also went to the event complained that they spent most of their time in lines and a lot of vendors sold out of their popular items.

Click below to read the review on every cart I tried. 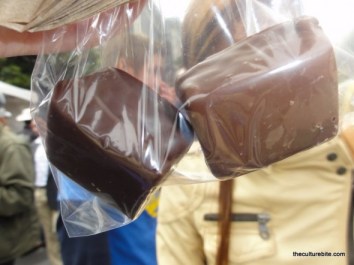 I’ve never heard of this place until some guy at the festival raved about it. It had a short line, so we went for it. We grabbed a milk and dark chocolate clairesquares and a butterscotch cup. The butterscotch was a little too strong for my taste, but the clairesquares were awesome. A buttery shortbread topped with a thin layer of caramel and a fudgey chocolate. What’s not to like? I checked their website and you can purchase clairesquares at the higher-end grocery stores in the Bay Area such as Andronico’s and Whole Foods. 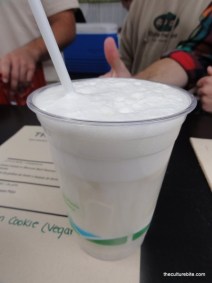 Three Twins had two of my favorite items of the entire festival – roasted peach ice cream and an organic root bear float. The roasted peach ice cream was rich and full of peach flavor. Oh and the root beer float! It was amazing! I was totally thrown off with the clear soda. Apparently organic root beer is clear. The sassafras flavor in the soda was very light and frothy. Yum! I gotta find the name of that rootbeer… 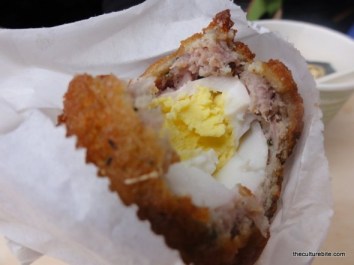 Oh, this wasÂ awful; probably the worst items of the festival were served here.Â InitiallyÂ we were excited because they had Scotch Eggs on the menu. I’ve been wanting to try the one at Wexlers for a while and thought this one would be similar. A scotch egg is a soft boiled egg wrapped in a pork sausage, battered then deep fried. Sounds amazing, right? Well, it took 3 tries to get one that was fully cooked. Yes, a few of my friends took a bite out of the others and ate raw pork. Gross. So on our 3rd try, they purposely gave us a small egg since it would surely be Â fully cooked and they gave us a complimentary hibiscus drink for the inconvenience. The 3rd egg was over done and dry. On top of that, the drink was bitter and overly floral. We ended up tossing both after a few bits/sips. 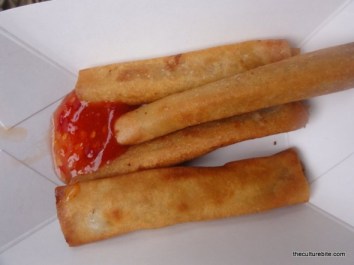 The lumpia was probably my favorite item of the whole day. Light, crispy skin with juicy flavorful meat topped with a sweet chili sauce. I could eat these all day. But, you really can’t ruin lumpia, so therefore, I give it 4 stars rather than 5. 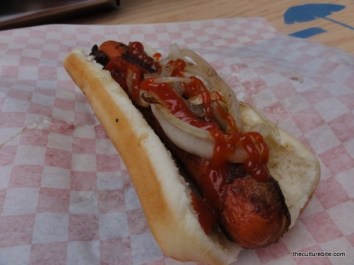 Not enough bacon. K wanted to try one of those famous bacon wrapped hot dogs and caught it on the menu at Lucero’s. The hotdog was juicy with a crunchy casing, but it was lacking in bacon flavor. It probably could’ve used another slice of bacon or a thicker piece. 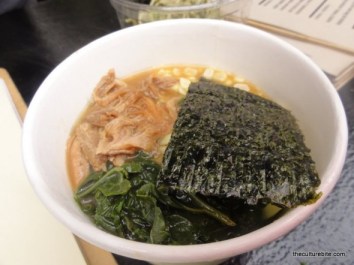 This place gets a lot of hype, so I had to try it. I never had a chance on Thursdays because the line is always so long. I was very disappointed after I tried both the pork ramen and the cold soba noodles. The ramen didn’t taste homemade at all, it was more like a linguine. The soba noodles were also was overcooked and mushy.Â I give them credit for the ramen broth though – it was rich and fatty as ramen broth should be. But, you really can’t skimp on the noodles. They have to be homemade and al dente. 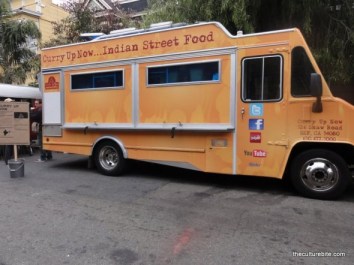 I didn’t get a picture of this since my friend ordered it, but I did sneak a bite. Curry Up Now is famous for their Tikka Masala Burrito and that’s exactly what we ordered. I was impressed with the size of the burrito. It was packed with tons of chicken tikka masala, Â basmati rice and pickled onions. I could’ve done without the pickled onions only because I’m not a big fan of crunchy/raw onions, but this was really good. The tikka masala was tomato-y and creamy, chicken was juicy and there was tons of rice. We got the mild, so it wasn’t spicy. But, I hear the spicy is pretty intense. I really appreciated their large portions, though. 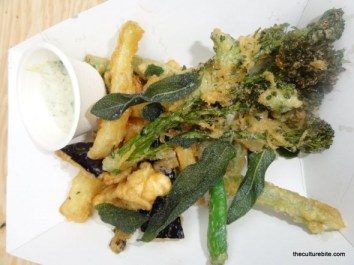 I was pretty stuffed by the time I ate this, but it was pretty freaking good. Tons of tempura veggies fried in a light batter and generously seasoned with salt. My favorite was the broccolini. It actually reminded me of the fried mushrooms at RN74. Usually, I feel pretty sick after eating a lot of fried foods, but this was so light, I could probably eat it all day. 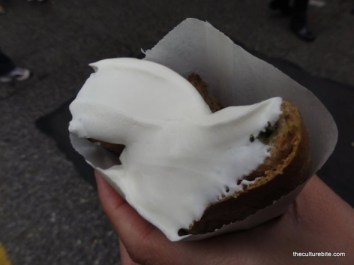 I haven’t had a piroshki since my dad used to take me to this place that’s now closed at Macy’s cellar whenever we went Christmas shopping. That was our tradition – shop for mom and get a piroshki. So, piroshkis have a sentimental value for me. My memory of a piroshki is a soft pillowy dough fried with a ground meat filling. Well, I ordered a cheese and spinach piroshki at Anda’s and the bread was hard and crispy and topped with an obscene amount of sour cream. It was more like a piroshki panini and it definitely did not satisfy my craving. 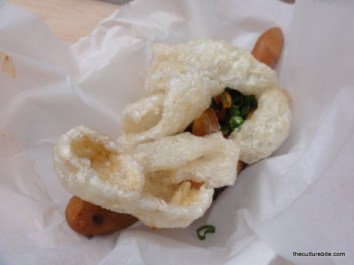 I’ve had their famous chicharonesÂ before and it is uh-maze-ing, worth 5 clubs. The pork rinds had the perfect balance of sweet and salty and they just melted on my tongue. I could eat them all day, but I’d feel really guilty afterwards. My friend ordered their famous Zilla Dog which was a little gross hearing about every ingredient they crammed in this dish. I could just imagine the creators of the Zilla Dog brainstorming this concoction. “Let’s take the fattiest things ever and throw it all in a hot dog!” The ingredients consisted of a bacon stuffed hot dog, Namu kimchi, a special sauce and chicharones. All individually tasty, but together, there’s just way too much going on. And, this hot dog costs about $8 at full price. I’m going to stay away from the Zilla since I don’t want to pay $8 for a stomach ache.

I wanted to puke after 3 hours of intensive eating, but I’m glad I was able to get a taste of all of these items. Stay tuned for an Eat Real Fest review! I think the quality of the food was much better than this one. Check out my photos below.