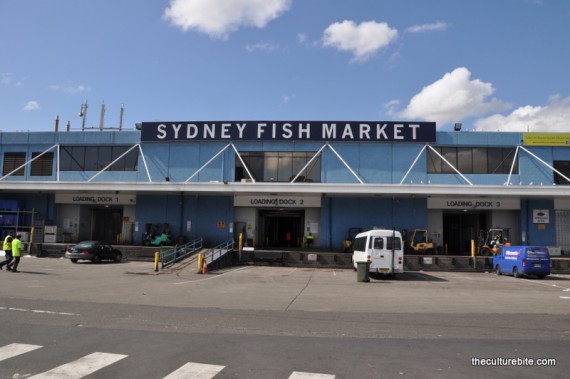 We managed to cram a lot of things into day 3. We started off at the Sydney Fish Market. Raw oysters and salmon sashimi for breakfast? Yes, please! After about a 20 minute walk from Darling Harbour to the Pyrmont district, we were at the fish market. The fish market itself is pretty small with 8 or 9 stalls. The most famous is Doyles, but it was closed by the time we got there which was around 11am.

After pacing the isles back and forth, we finally decided on a dozen Sydney Rock Oysters, 4 chili prawns and one fried soft shell crab from Nicholas Seafood. We also grabbed a small container of tuna and salmon sashimi from the stall next door (can’t remember the name) and a liter of orange juice from the stall in the back (highly recommend). Then we feasted, first starting with the oysters. These oysters were much different than the sweet ones from the Bay Area. They were much creamier with a slightly bitter after taste. Still tasty, but I would prefer Hog Island Oysters over these. The salmon sashimi was extremely fresh and had the texture of butter, while the tuna was slightly mushy. I’m assuming tuna isn’t something they import every day. The prawns were the filler of the meal. These big guys were stir-fried in Thai sweet chili sauce with shells and all. Really tasty, but we were pretty full at this point. Last but not least was the soft shelled crab. We did some research prior to visiting the fish market and all of the blogs warned us to stay away from the fried foods. About every stand in this market sold fried seafood, assuming that they used day old fish. But, the crab looked so delicious with its little jalapeno on top that we couldn’t resist. After the first few bites, I understood the warning. The soft shell crab was so battered and deep fried, oil kept collecting in my mouth with each bite. We quickly washed down the oil with our very fresh orange juice and moved on to our next destination. 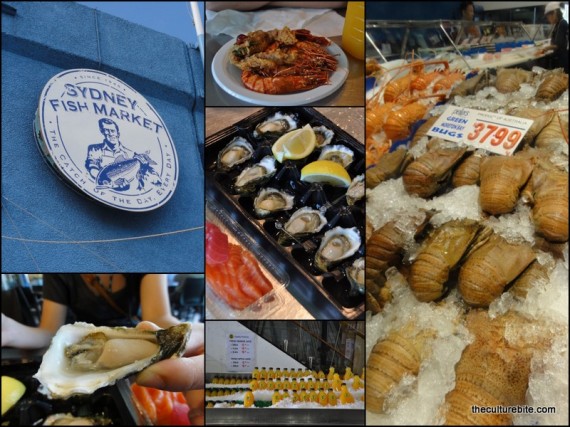 We headed over to Circular Quay to take the Sydney Ferry to Manly Beach ($14 round trip). The ferry ride is about 30 minutes and you’ll get great views of the Harbour and the ocean. There is also a Sydney Fast Ferry that can take you there in 18 minutes, but we opted for the former. The beach was beautiful and completely packed with locals and tourists. We only spent about an hour here because I had to work a bit (yes, this was a work trip for me). There’s a 5 minute walk from the ferry station to the beach and all along the way are cute little tourist shops selling Ugg boots and t-shirts with “Manly” on them. It was a little funny to see Ugg boots all around Sydney (even the convenience stores!) in 70-80 degree weather. On our way back to the ferry, we stopped at Copenhagen for some ice cream. I got the passion fruit and K got honeycomb. Honeycomb ice cream is bomb. I “secretly” wanted to eat all of K’s ice cream in addition to mine. Notice how I mentioned secretly with quotation marks? 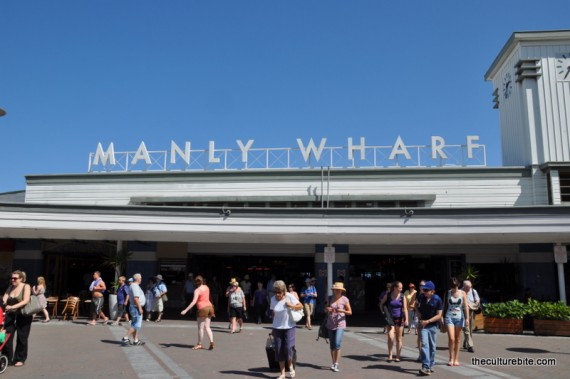 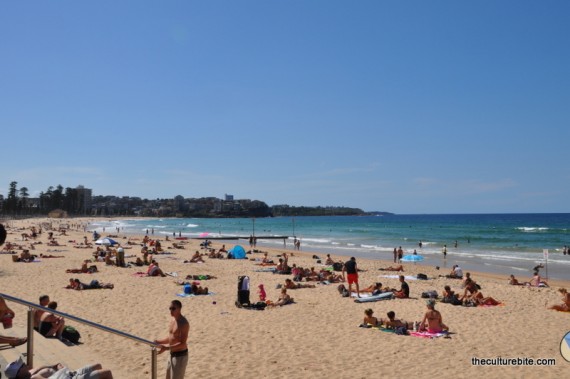 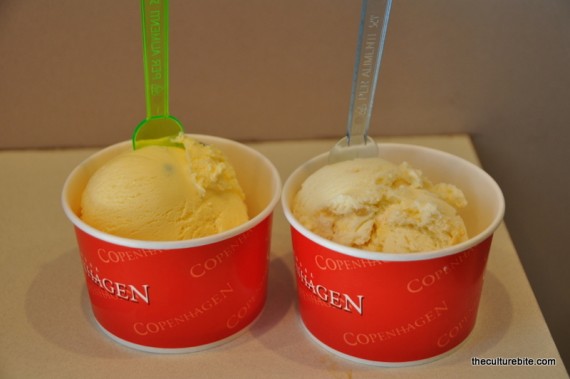 So, I checked into work at the convention center for a few hours and realized that we still had time to stop by the aquarium in Darling Harbour since it closes at 8pm. With an hour to spare, we purchased 2 tickets and headed inside. At first, I was a little underwhelmed. The exhibits looked temporary and like they needed a deep cleaning. Seahorses here, jelly fish there, frogs over there. Been there, done that. Then, we came across a giant room with a giant pool in the center. What’s this? After a closer look into the water, I noticed the silhouettes of sting rays, manta rays and… a shark fin? The room was called the Shark HQ. We hung out at the top for a while to take pictures of the predatory sea animals then realized that we could go under the tank! There are 2 tunnels that go through the shark tank – tunnel 1 had some sharks and the sting rays, tunnel 2 has the much bigger, scarier version of everything in tunnel 1. They had 7-8 foot great white sharks! SO cool. The best part was that it didn’t force you to move down the tunnel with one of those people movers like at the SF Aquarium in Pier 39. K and I spent most of our time in here trying to take silly pictures of us and the sharks. The last section was another large pool with fish in front of you, on top of you and under you. I think this aquarium did a great job of capturing what it’s like under water without really being underwater. I saw schools of fish floating around, a leopard shark, and other fish native to Australia. The aquarium’s most famous fish, the sawsharks, were in this tank too. They actually looked kind of lazy, but the description says that it kills its prey by slashing its snout (which is covered in teeth) back and forth until they can eat. Pretty scary guys… 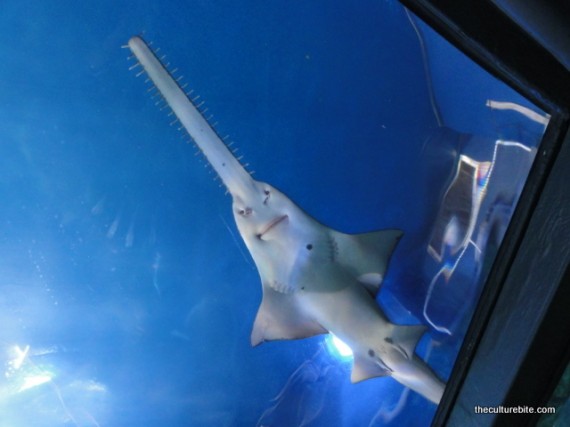 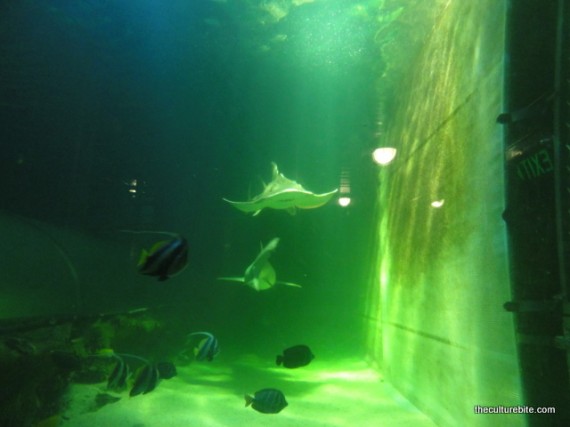 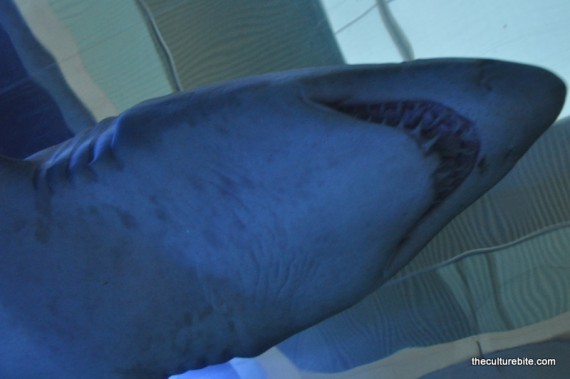 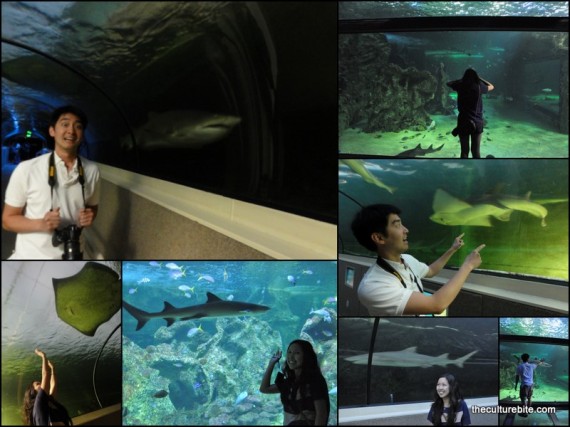 For dinner, K and I headed to Chinatown and ate homemade noodles at Yee King. We wanted to eat at Chinese Noodle Restaurant which is famous for their handmade noodles, but they didn’t take card. One thing you’ll notice in Australia is most places do not take credit cards. Debit cards are a new thing for them, so that’s accepted everywhere. Credit cards, on the other hand, are not widely accepted and if they are, the vendor will most likely charge you a credit fee. Okay, back to Yee King. K and I ordered the Dan Dan Noodles and a plate of pumpkin coated with a salty egg batter. The dan dan noodles were soupy and coated in loads of dry chili flakes. Their homemade noodles had a great texture – chewy, firm. And, it had that great handmade noodle look to them. The pumpkin wasn’t very good. The batter was a little too thick than what we’re used to and tasted like old oil. This dish is much better in SF. 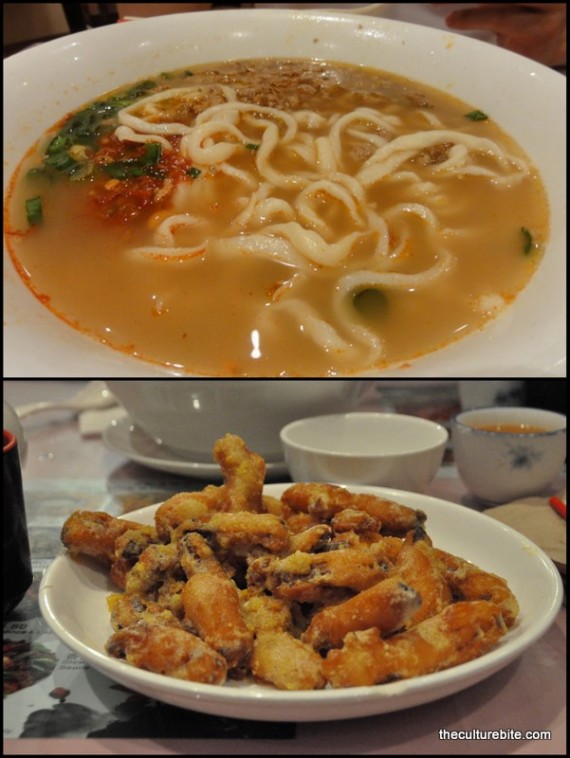 Whew, that was a long day. The next few days, I had to work, so K will be posting about his adventures. 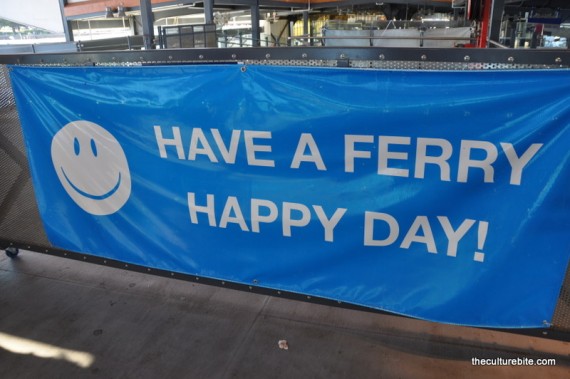