Just like WWI and Marie Antoinette’s reign of France, our two-week European vacation ended with a trip to Versailles. We did have one more day, but all we did was shop. So, the last post will only be of our last meals in Paris.

Versailles is about a 1.5 hour train ride from Paris. We were lost in the train station for a bit, so it took us a little more time to get there. Tip: take any train that starts with a “V.” 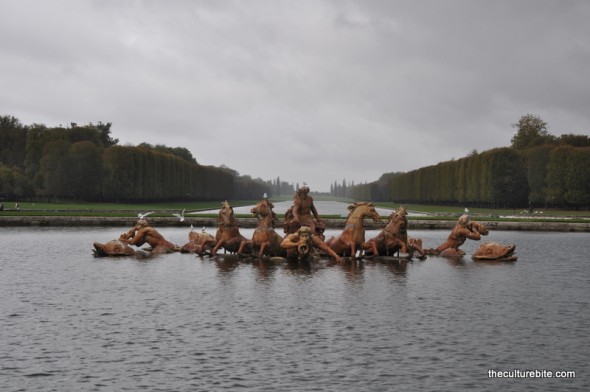 When we got there, the weather was nasty. Cold, rainy and cloudy. The grand palace of Versailles was actually closed when we first got there due to poor weather. So, we decided to roam the famous gardens first. The place is huge! Rick Steve’s rule of thumb is 1.5 hours in the museum, 1.5 hours in the gardens and 1.5 hours at the chateaus. The gardens were beautiful, although I seemed to enjoy the Tivoli gardens near Rome more. I’ll blame it on the rainy weather. Also, Versailles’ garden is famous for it’s fountains, but unfortunately, they’re only open in the spring and summer so we didn’t get to see the garden at it’s full caliber. Here’s a funny story I’ve heard. Louis XIV built Versailles way before there was actual plumbing, so in order for the fountains to work, his servants would run from fountain to fountain to manually pump the water as the King roamed the garden. 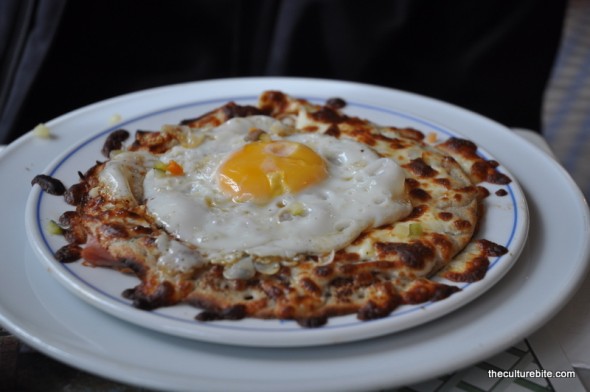 K and I stopped for a quick lunch at one of the many restaurants in the garden. We each ordered a savory crepe which we were both dissatisfied with. The crepes must’ve been pre-made and frozen. The cheese was cold and hard, the crepe was almost as thick as a pancake and it was topped with perfectly cubed frozen veggies. Blegh! 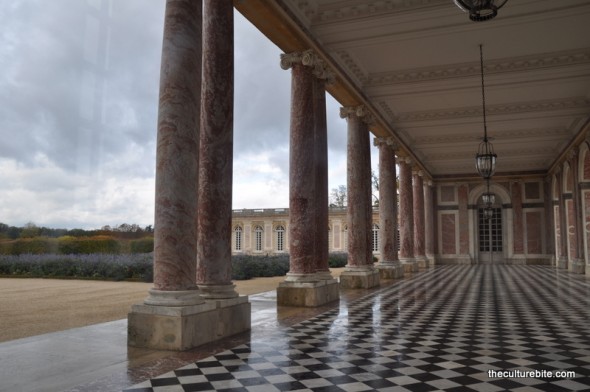 We walked to the far end of the garden to see the Grand Trainon, a large pink chateau where Louis XIV used to spend time with his mistresses. 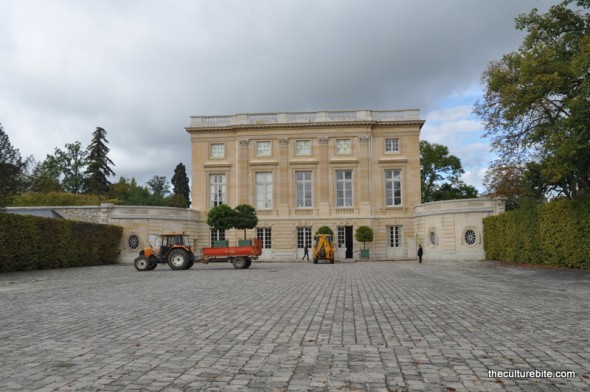 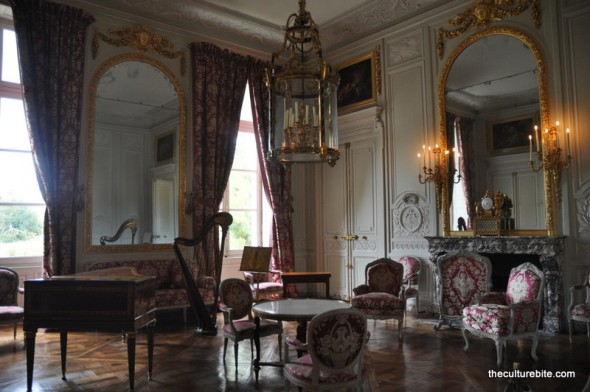 Nearby sits Petit Trainon, a chateau given to Marie Antoinette by Louis XIV. 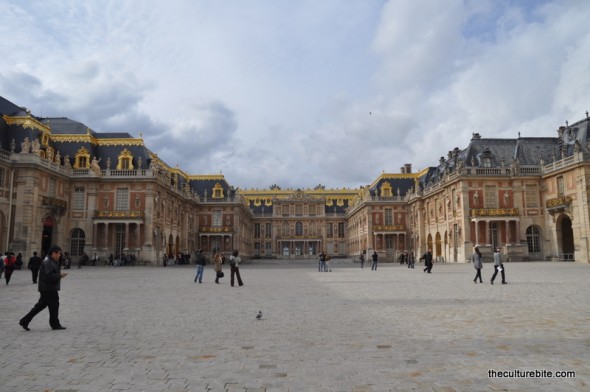 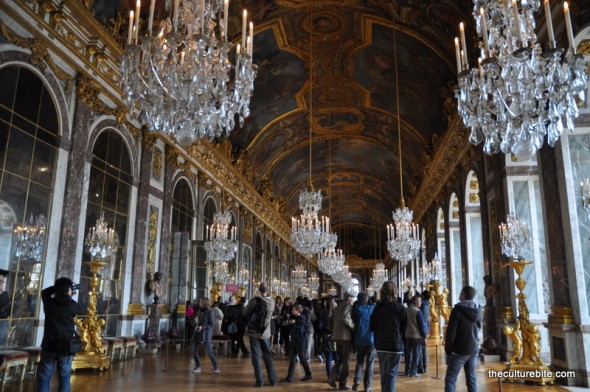 Last but not least, we visited the grand palace. The rooms were filled with gold trim, velvet curtains, and crystal chandeliers. If there’s anything I’ve learned being here, it is that Louis XIV is not one to skimp. There was an exhibit for a Japanese artist, Takashi Murakami, on display at the palace and I found it really weird to see the modern cartoon sculptures sitting in each of these old rooms. Although it was very cute, I thought the exhibit took away Versailles’ limelight since most of the visitors were paying more attention to the sculptures rather than the rooms themselves. 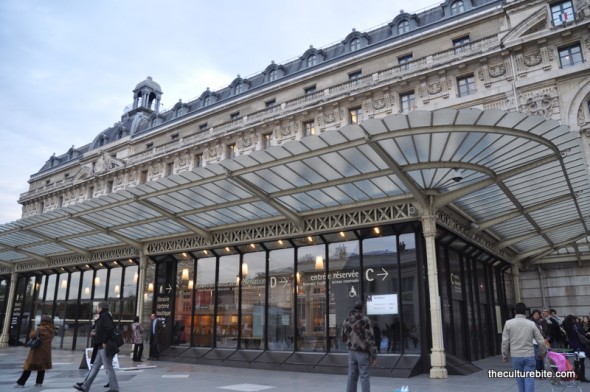 We rushed back to Paris to see the Orsay before it closed. The Orsay was included in our Paris pass, so I figured, “Why not take advantage of the free admission?” We had about 30 minutes in this museum – only about 3 hours too short. It was very different than the other museums we’ve been to on this trip. The Orsay houses one of the world’s largest collection of impressionist and post-impressionist art which includes works by Van Gough, Monet, Manet and Gauguin. Unfortunately, a lot of the museum was on loan at SF’s de Young Museum. So when we were in Paris, the famous pieces were right in my home town. Bummer!

On our walk back to the hotel, K and I stopped at Angelina which serves the “best hot chocolate in Paris.” Although it was very good, I think the hot chocolate at Cacao Sampaka in Barcelona is the winner. Angelina’s hot chocolate was sweeter. I preferred Cacao Sampaka’s because it seemed to be made with a darker chocolate and I could really taste the complexity of flavors in the drink. If you’re not heading to Barcelona though, Angelina is a great alternative for a hot, thick, chocolaty drink. I can’t find my hot chocolate photos, but I’ll get them up soon. 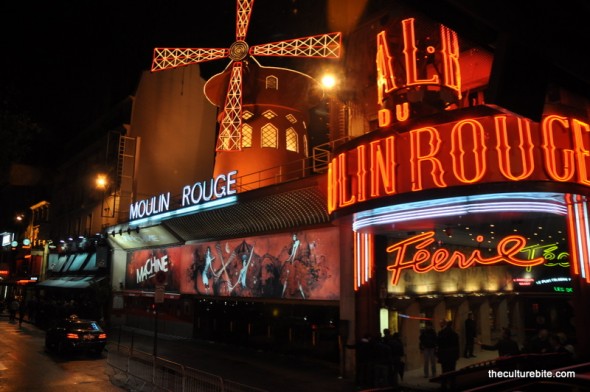 Throughout this entire trip, I wanted so badly to go on a double-decker tour bus. We finally got around to it this day and paid a hefty amount for a night time tour around Paris. The sights are beautiful lit up, but for some reason, I couldn’t keep my eyes open! I was so exhausted, I kept nodding off. It wasn’t until I saw the Moulin Rouge that I stayed awake. That site was a must see on my list.

From here, we called it a night.