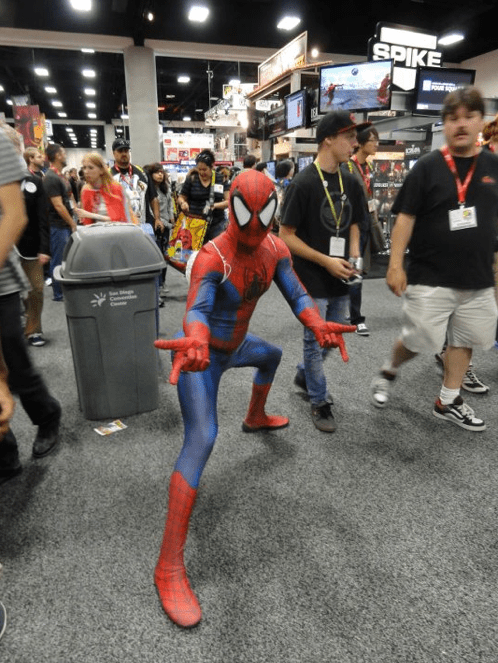 We’re back from another successful week at Comic Con. I’m seriously suffering from post-con depression now that it’s over. With 150,000 people attending the con this year, we still managed to have a great time. Good thing K and I waited in line at 2:30am Sunday morning to purchase our tickets for 2012! Here’s a recap.

We flew out on Wednesday and spent the afternoon in the Gaslamp district. K and I grabbed a quick bite at the Burger Lounge that takes pride in their all organic menu. After that, K and I headed over to the Nerd HQ, Zachary Levi’s (Chuck) off-site event, to pick up our Conversations for a Cause with Zachary Quinto tickets. While waiting in line, K and I ran into Zach Levi himself and each got a photo with him! Comic Con didn’t even start yet and this pic alone made my week. 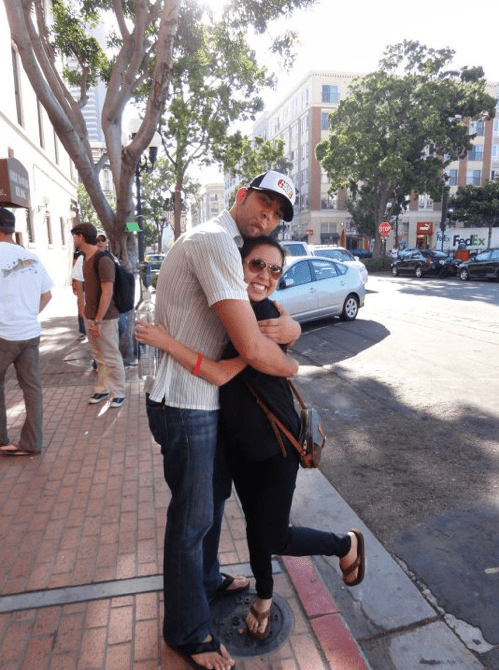 After grabbing our tickets, we headed for the exhibit hall for the Preview Night. We tried to get in as much of the exhibit hall as possible this night so we wouldn’t have to come back. We were able to snag a t-shirt from the Marvel booth, buttons from the DC booth, a foam sword from the Summit booth, and much much more. On Thursday, we decided to change up our Comic Con experience and participate in the Nerd Quest scavenger hunt by Nerd HQ rather than sit in Hall H all day. So glad we did this because you’re looking at the grand prize winners right here! Thanks to TheNerdMachine for the brand new custom Xbox 360 and Kinect coming our way in the next few weeks!

After this, we headed to Dick’s Last Resort for some grub. At this point, K and I were so exhausted from running around, that all we wanted was some quick food for sustenance. Dick’s is not the place to go for that. We had no idea this restaurant was themed where the servers treat their patrons like crap. On any other day, I could play along, but at that moment, I really didn’t want to be called an oxymoron for being an “Asian nerd” or have a cup of water thrown at me. We quickly ate our tequila cheese nachos and our crabby balls and headed for the Jon Favreau and Guillermo Del Toro panel in Hall H. Boy these 2 guys are entertaining. Guillermo has the mouth of a dirty truck driver and it’s just plain hilarious hearing him talk. The 2 movies they spoke about were Favreau’s Magic Kingdom and Del Toro’s Haunted Mansion. Can’t wait for those! After this, we shuffled out of Hall H and headed back to the hotel.

Friday morning started with The Adventures of Tin Tin panel with 2 of the biggest directors of our time, Steven Spielberg and Peter Jackson. I’ve never read the books, but the movie looks interesting. The 2 directors talked about how they debated between live action and animated. They shared a screen test of the live action, which I thought was cool. But I’m assuming it failed since the movie is now animated. 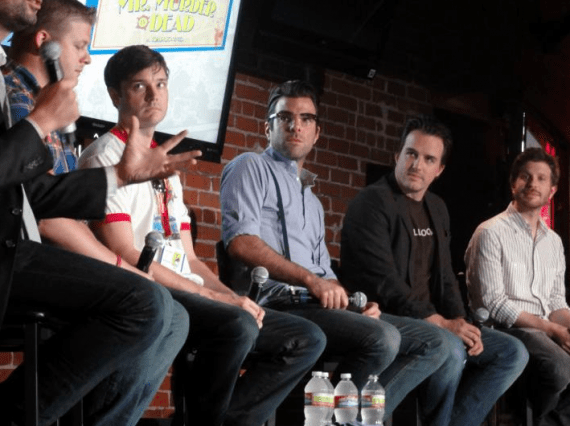 At 12pm, K and I headed for the Nerd HQ for our Zach Quinto talk. The actor spoke with his group, Before the Door, about their upcoming graphic novel Mr. Murder is Dead. After the talk, the guys stuck around for a 2 hour signing. I ended up getting my Zach Quinto photo I took with him 2 years ago signed!

On our way back to the convention center, we grabbed a 2 hot dog/soda combo at an ice cream store for $4.75. We were desperate and needed to eat something quick before The Amazing Spiderman panel. We ended up missing that panel because the hall was full. 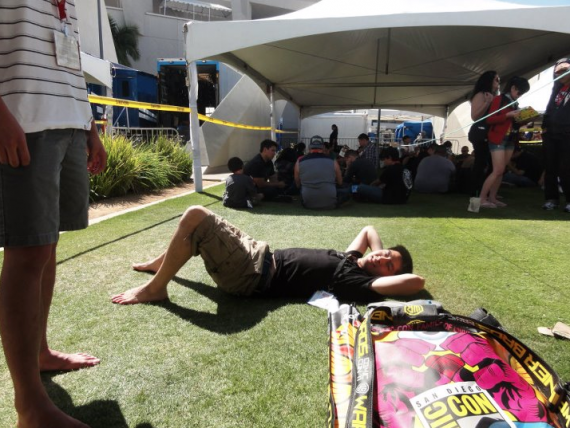 Boo… Anyway, we jumped out of the line and wandered around the Gaslamp. Walking around the little South Park town put together by Comedy Central, we discovered a little food truck area. I found the most devilicious sandwich at a truck called Devilicious. I cannot believe I ordered the PB&J with bacon and cream cheese. Yeah, you read that right. The sandwich was so warm and gooey from all of the ingredients. On top of that, the bread was buttered and pan fried. This was probably the most sinful sandwich I’ve ever eaten. 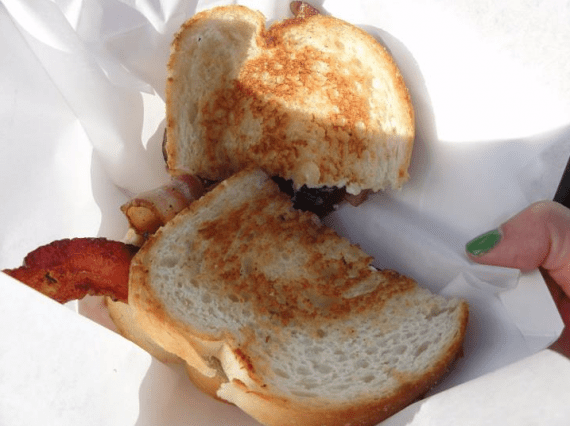 After this, I sped-walked back to the hotel to work off the sandwich and get ready for the most anticipated party at the Nerd HQ. Zach Levi was expected to be there with all of his celebrity friends. So we all got dressed and headed out to the venue Jolt’n Joe’s. The HQ was actually pretty cool. They set up demo stations for pre-released games like Gears of War 3 and Rayman and a free photobooth to take unlimited photos. We hung out here for a few hours and then we realized that we’d never be able to actually hang with the celebs, so we headed back home. On the way, we ran into another Chuck cast-member, Mark Christopher Lawrence (aka. Big Mike). 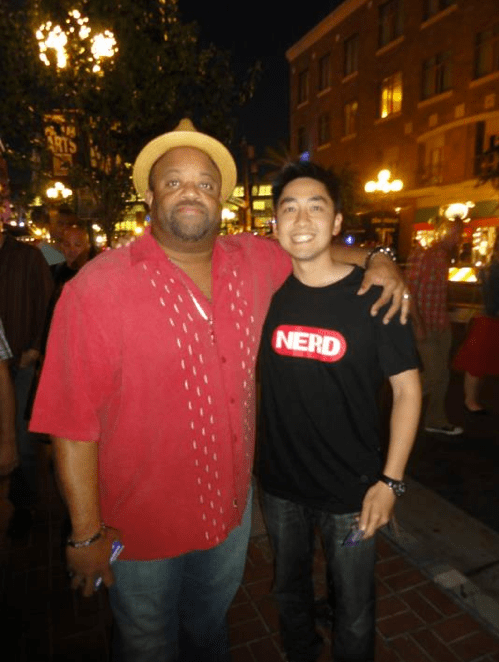 Now this is when our trip got crazy. We wanted to see the Chuck panel Saturday at 10am and we heard that fans were planning to jump in line at 2am. So, K and Ivan headed for the expo hall at 1:30am to wait in line. YES. In line for almost 9 hours to see a panel. They weren’t even at the front of the line! This is my only qualm about the conference. People are willing to waste a day in line, and if you don’t do the same, you’ll miss out. I jumped into line around 8am and met K and Ivan’s new Australian friends. Apparently, Zach Levi visited the line at 4:30am to greet the fans waiting in line. So cool! 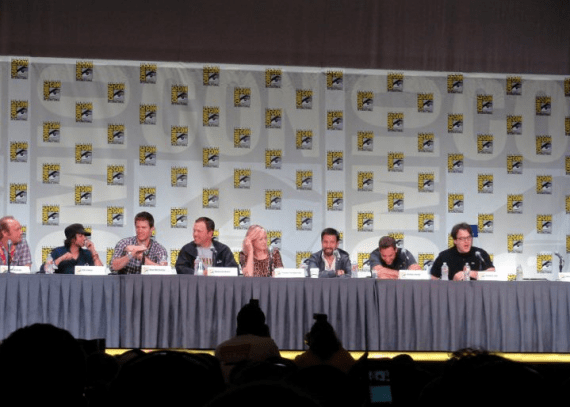 Anyway, the panel was completely worth it. We got some sneak peek footage of their final season and a performance from Jeffster. We even got a pretty cool Nerd Herd t-shirt. Too bad it’s a large and won’t fit me.

By this time, the guys were wiped out, so we decided to hang out in Ballroom 20 for the screening of the new show, Terra Nova, and the Futurama panel. Terra Nova is a new show on FOX. Cool concept (people from the future travel in time to restart civilization in prehistoric times), but I thought the pilot was boring. After this, we headed for the ticket fulfillment room to redeem our gift for sitting in on the Futurama panel – just a button. 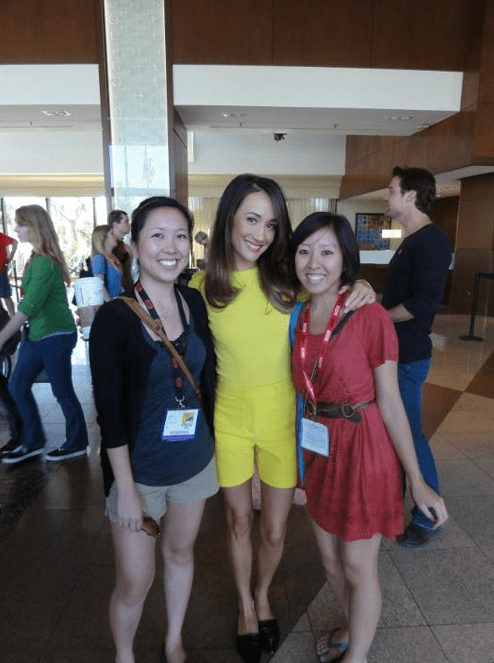 But, on our way there, we ran into Nikita actress, Maggie Q! After this, we took another stroll through the exhibit hall for more free schwag. Guys were pooped, so we headed back to the hotel and ordered some pizza delivery from Dominoes. 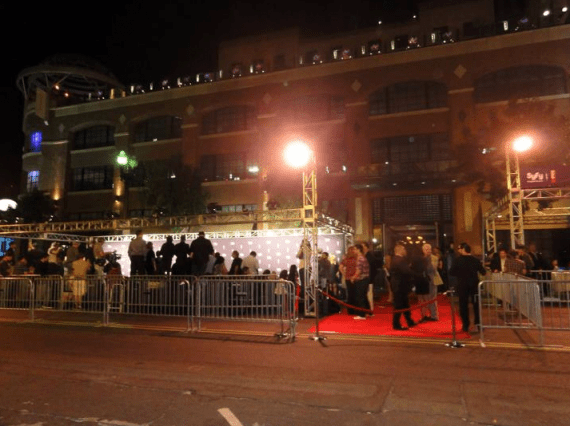 It was Saturday night, and the biggest Hollywood party goes down at Hotel Solamar in the Gaslamp. Because of yearly tradition, I had to go. Lucy, K and I were the only ones that made it out and we were able to catch glimpses of the cast of Eureka, Sanctuary, Haven and Pedro from Napoleon Dynamite. The most famous celeb there, however, was eating at a restaurant across the street. Jonah Hill! We called it a night early and headed back for the hotel.

K and I got about 2 hours of sleep before we headed for the 2012 registration line back at the convention center. I think we’ve already established that we were crazy. K and I attempted to sleep on cement on the marina at 2:30am before being herded over into a room in the Hyatt. At 8:15, K and I were the only members of our group with guaranteed passes to next year’s Comic Con!

We headed back to the room to clean up and then went back out to the exhibit hall in hopes to get a poster tube from the FOX booth. On our way there, we saw the cast of Glee signing at the booth! I love Darren Criss! Who knew he was so petite in person? 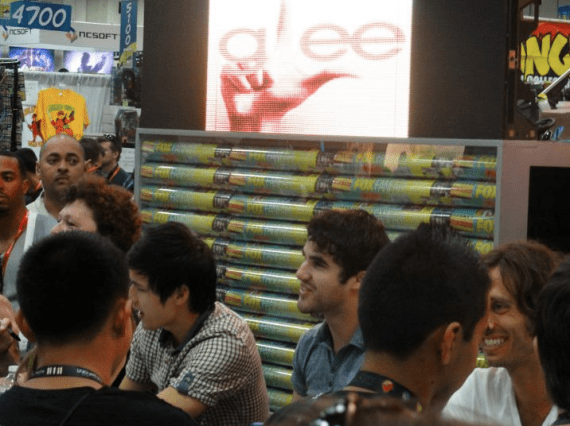 Lucy, K and I had a late flight out on Sunday, so we killed time in Hall H and sat in on The Cleavland Show and It’s Always Sunny in Philadelphia panels. And that was the wrap to our Comic Con experience.

Here’s a group pic we took at the Nerd HQ photo booth. Can’t wait for next year! 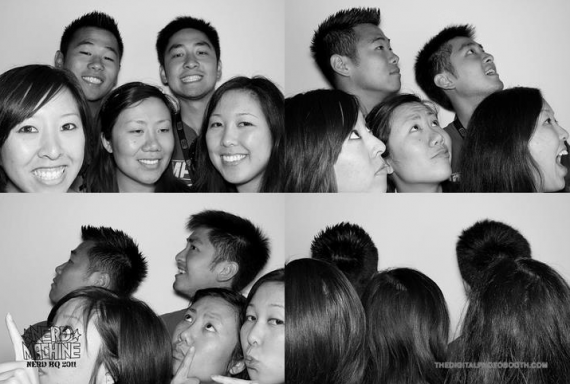