Sam and I used to love trying all the fish taco joints in the Bay Area.Â  Every time someone would mention a place with fried fish tacos that they loved, we’d make it a point to try it out.Â  Such was the case with Flying Fish Grill.Â  I had a coworker that constantly raved about how he would take his sons to the best fish tacos he’s ever had in Half Moon Bay. So, of course we had to try.

Making the trip to Half Moon Bay isn’t difficult, you can either take the 92 or the 1.Â  We were tempted to stop by Barbara’s Fish Trap for some quick Clam Chowder, but fought the urge and continued on.Â  Finding the place is a little tricky, it’s at the south side, end of the 92 where it meets the 1.Â  The sun was shining, and the tummy’s were rumbling.Â  We ordered the Fried Calamari, Sweet Potato Fries and Fish Tacos. 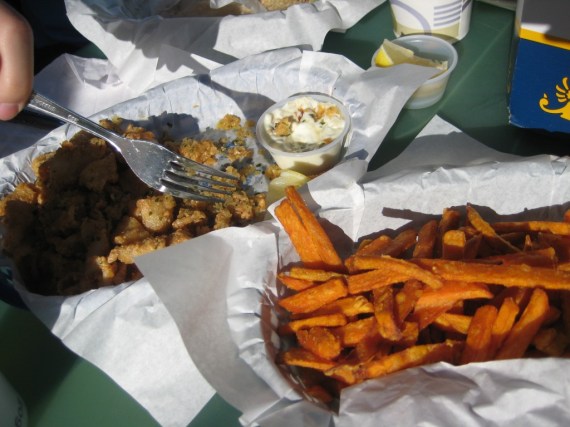 The Fried Calamari was crispy, and seemed extra battered.Â  With a quick spritz of lemon and a dip into the tartar sauce, the fried calamari were ready for Kingston consumption.Â  I wouldn’t say these were the most amazing pieces of calamari I’ve ever had, and so would not recommend them.Â  If you know what Sweet Potato Fries taste like, then you wouldn’t be missing much. 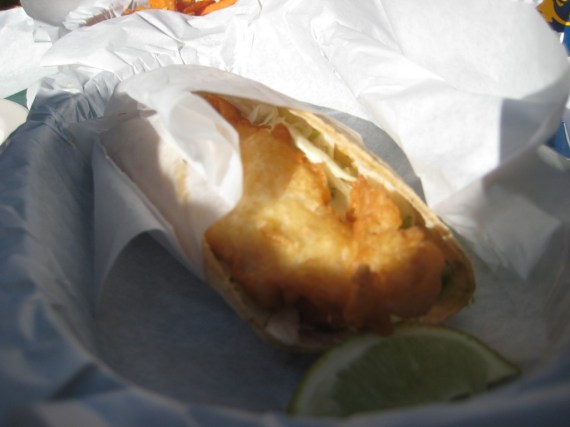 Finally, we ended with the fish tacos.Â  Sam ordered 1, and I ordered 2.Â  Cod is the type of fish we ordered, although you can also choose Salmon.Â  I actually liked the way they fried the fish, it wasn’t overly battered, and it was the right crispiness.Â  They place on a bed of shredded cabbage inside a small corn tortilla.Â  Pictured is Sam’s, plain Jane fish taco.Â  I actually ordered the Grande, which included Salsa, Guacamole, and cheese.Â  Definitely good, but not the best, I still reserve that for Nick’s Crispy Tacos.

Note: They are moving to a new location this summer at 211 San Mateo Road!