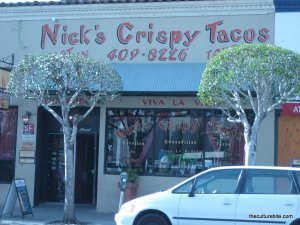 I first discovered Nick’s Crispy Tacos when 7×7 released it’s 100 Things to Try Before You Die. Back then, I was completely oblivious to good quality fish tacos. I had been eating Rubios at least 2-3 times a month thinking it was the greatest thing on earth. Boy, was I wrong. Now, stepping into another Rubios would be blasphemous to the fish taco gods.

The decor at Nick’s Crispy Taco’s is actually unexpected. The hipster-style interior is gaudy red with crystal chandeliers hanging from the ceiling. The restaurants double life consists of a heavenly taco place by day, the trendy nightclub Rouge by night.

Pescado Tacos – When you order this, you MUST order it “Nick’s Way,” which is about $1 more. Trust me, it’s completely worth it. “Nick’s Way” is an extra crispy-fried corn tortilla wrapped with a soft tortilla with jack cheese and guacamole in addition to your choice of filling. These are the best fish taco’s I’ve ever had and any other fish taco I’ve had since has never come close.

The pescado taco consists of a layer of cabbage and red onions, Baja-style fried white fish, fresh guacamole, lime mayonnaise, salsa and cilantro. The tacos are enormous, so you can get away with one if you’re looking for a light meal. If you like spicy, ask for the habanero sauce. They keep that hidden in the back and it’ll add a huge kick to the taco.

Elote – I LOVE Mexican corn. I get this any time I’m at a county fair. Mexican corn is grilled corn rubbed any kind of seasoning. This one specifically had butter and topped with Mexican cheese, chili powder and cayanne pepper. It’s so rich and creamy, and mucho deliciouso. It really does make this healthy grain/vegetable unhealthy for you.

Horchata – Horchata is a Mexican sweet rice drink flavored with cinnamon and other spices. It pretty much tastes like the left over milk after a bowl of Cinnamon Toast Crunch. It’s a little chalky, but I still love it.

The Nick from Nick’s Crispy Taco’s is actually at Underdogs on Irving now. They pretty much serve the same menu, including the famous fish tacos. I like to go there since it’s more convenient for me, but parking is pretty rough during certain times of the day.

I shake my fist at NIck’s Crispy Taco’s for setting my fish taco standards so high. I will probably never eat a fish taco anywhere else ever again.