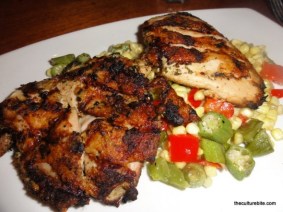 My good Canadian friend, Tye, who just moved to America (specifically SF) took me to Luna Park for my bday last month. My bro and sis-in-law tried it out a couple weeks prior and mentioned they had a make-your-own s’mores dessert on the menu. As soon as I heard s’mores, I knew I had to try it out.

Like any other restaurant in the Mission, Luna Park is a trendy hot spot for young hipsters looking for a night out drinking or a meal with a group of friends. The restaurant is decked out with red walls, industrial piping on the ceiling and crystal chandeliers hanging from the ceiling.

The place is crowded, even until late in the evening, which may explain the poor service we received that night. Anytime we needed something (to place an order, glass of water, check) we had to wail our arms until we grabbed our waitress’ attention.

Some items were really good, and some I could pass on.

Goat Cheese Fondue w/Grilled Bread and Sliced Apples – This was my favorite part of the night. I’m a huge cheese fan, especially when it comes to stinky cheeses. Take a potent cheese and turn it into fondue with some buttery bread and I am in heaven.

Moules Frites: Prince Edward Island Mussels with Dos Equis, Bacon, Red Fresno Chiles, Lime and Shallots with French Fries – I have never been a fan of mussels, but I do admit these were awesome. They used baby mussels so that the flavor wasn’t too over powering with each bite. It tasted more like clams soaked in a buttery wine sauce. We dipped the bread from the fondue and found that to be sinfully good.

Oven Baked Macaroni & Cheese and Broccoli with Applewood Smoked Ham – Such a disappointment. The mac-n-cheese was pretty bland itself. Seemed like it only had one flavor – rich. It didn’t have much depth to it. I’m not trying to be a snobby critic, but it was missing something. Something sharp. I got it with the ham, but the large cubes of the salty meat were overpowering for the dish.

Beer Marinated Grilled Half Chicken with Brentwood Corn Ragout, Squash, Blue Lake Beans, Gypsy Peppers and JalapeÃ±o – This dish came as a recommendation and it didn’t disappoint. Opposite the mac-n-cheese, the chicken was full of flavor and spices. Spicy, smoky, and sweet. With my leftovers, I ended up cutting up the chicken and throwing it in my mac-n-cheese. That definitely kicked it up a few notches.

Vegetable Risotto – Completely bland. Tasted like the chef cooked the risotto with water rather than a broth. When something is this creamy, you usually need something in there to balance the flavors. This didn’t have it.

DIY S’Mores – These were so yummy. I’m grading this lightly since I did make them myself at the table. The marshmallow sauce and chocolate came on separate fondue burners with a side of homemade graham crackers. The s’mores taste ooey gooey and full of love, but you have to eat it quick or else the marshmallow hardens and sticks to the serving cup.

All-in-all, this restaurant was satisfactory. I wasn’t blown away by anything that would make me want to come back.