Aloha all your foodies out there. To show that The Culture Bite isn’t limited to Bay Area eating establishments, we decided to take our act on the road…or rather across the ocean to the beautiful Hawaiian island of Kauai. Why Kauai and not Oahu you ask? Sure Oahu has it’s fair share of good places to grab Hawaiian food but the feeling was that Oahu is very metropolitan and to really get a feel of Hawaii, we should venture to one of the more native Hawaiian islands. So here we go on our Hawaiian food tour…

Our first stop every time we come to Kauai is Hamura’s Saimin. Hamura’s is a family owned establishment in a small alley off the main street in downtown Lihue. There are no tables but rather several series of counters where people just saddle up on stools and eat with whoever is around them. The women working there have been the same that I can remember from 7 years ago when I first went there. You better know what you want to order when they come by because it’s the one shot you get to order as they are busy taking care of everyone else. The place is usually pretty crowded with a lot of locals but more recently a lot of tourists are finding out about it. 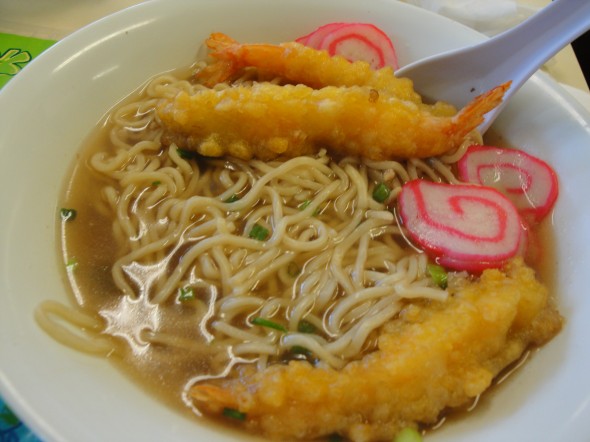 This is my staple. I love the shrimp saimin. I am not a big fan of veggies so I ALWAYS order the shrimp saimin because as you can see there is a lack of veggies. The saimin here is the best I have had. No where else comes close. The noodles are cooked perfectly. They are not over done…ever. The broth is really tasty but I am sure it isn’t the best for you but who cares! The shrimp are done tempura style so if you don’t eat them fast enough the batter will get soggy, hardly an issue in my case. Delicious! I am drooling about it now as I type about it. 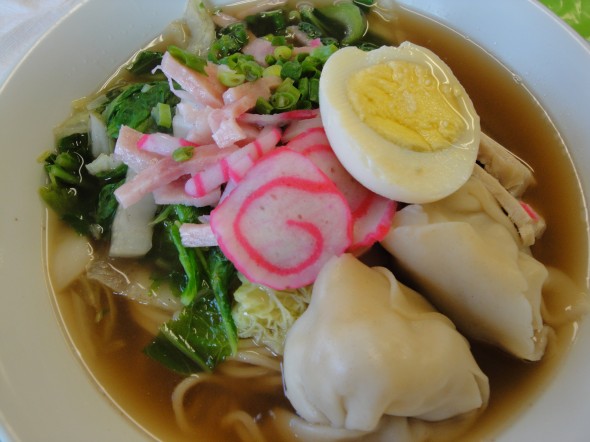 Most people who come to Hamura’s get the special saimin. What makes it special? Unlike the regular saimin that just comes with spam, fish cake, and green onions, the special saimin also comes with a bunch of veggies, won tons, and a hard boiled egg.Â  Most people like everything about this saimin with one exception…the won ton. The wrapper is good but the filling is disappointing. But I suppose you shouldn’t have high expectations for won ton in a saimin restaurant in Hawaii. 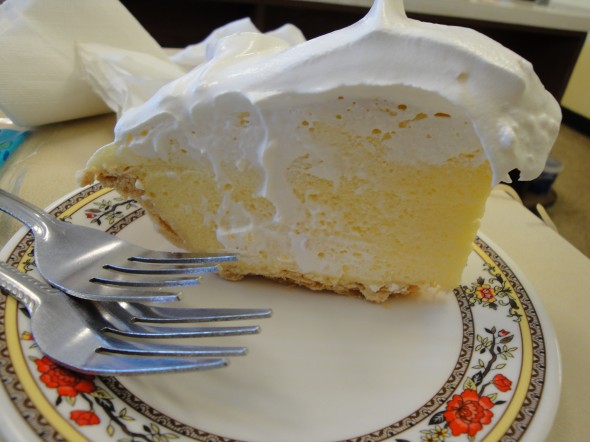 Only one of the best pies ever!!! Lilikoi is Hawaiian for passion fruit. The lilikoi chiffon is super light but has the very distinct taste of passion fruit. The crust is nice and flaky and isn’t very thick or dry at all. The whipped cream is cool whip type whipped cream. I absolutely have to have this pie every time I go here…unless we buy a whole pie to take back to our condo, which we did.

I so want to give Hamura’s a 5 clubber but I can’t due to the won tons so Hamura’s will get the first ever 4 club-up rating, meaning that it’s not quite 5 club status but definitely higher than 4 clubs.

Our next food adventure led us to Poipu Tropical Burgers. The reason we came here was because there wasn’t much open by the time we were hungry since it was Labor Day and also we didn’t want to drive all the way back into the city and we happened to be at the shopping mall that Poipu Tropical Burgers was at. Also a few years ago we had breakfast here and it was really good. So we decided to give it a shot for dinner. 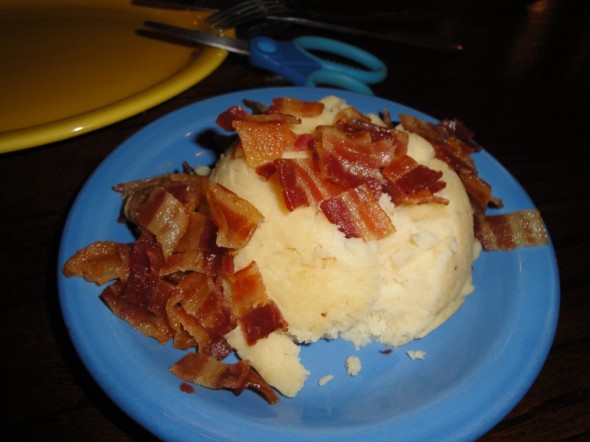 So I was really uninterested in anything on the menu because I wasn’t in the mood for a burger and I didn’t want to spend $17 on pasta so I ordered a side of garlic mashed potatoes and a side order of bacon and made my own entree. What can I say about this? Bacon was good, mashed potatoes were good. It’s pretty hard to ruin either but combine them together and it’s a winner. 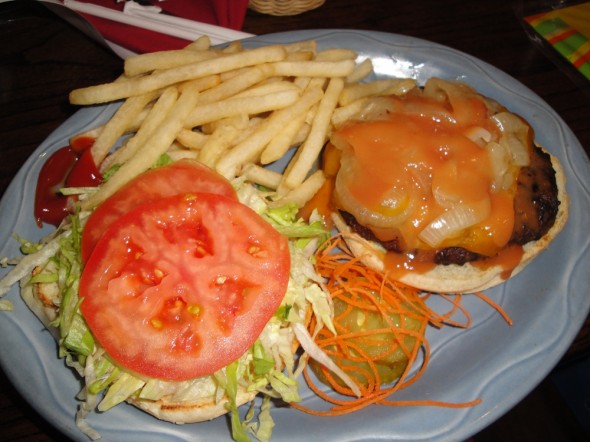 I have to say this burger was awwwwful. I didn’t think it was possible for a sauce to ruin a burger but here we go. The rum guava sauce completely overpowered the burger. I don’t even remember tasting any hint of guava. It was all rum, which to some people may not be a bad thing. But for us, it ruined this burger. We had to scrape off all of the sauce and douse it with ketchup and mustard to make this salvageable. At least the fries were decent.

Lesson learned…never go to Hawaii and eat at a touristy burger joint. You’re in Hawaii…eat local Hawaiian food. Don’t sell out to these types of establishments.

â™£ – On that burger alone, I would not even come back here for breakfast again. Definite poop on a stick.

One thing I love about Hawaii is the random places that have good restaurants. In Oahu, there is a bowling alley that has good ox tail soup. In Kauai, the Tip Top Motel serves the same dish in their cafÃ©. 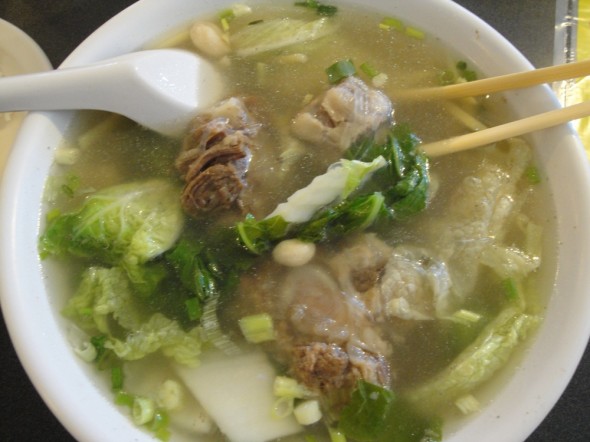 This ox tail soup has a really flavorful broth. The vermicelli noodles had good texture. The were cooked to the perfect consistency. But the best part was the meat obviously. The meat is so tender that if falls off the bone. An added bonus is that you get a healthy amount of veggies in it so you don’t feel as guilty eating it. 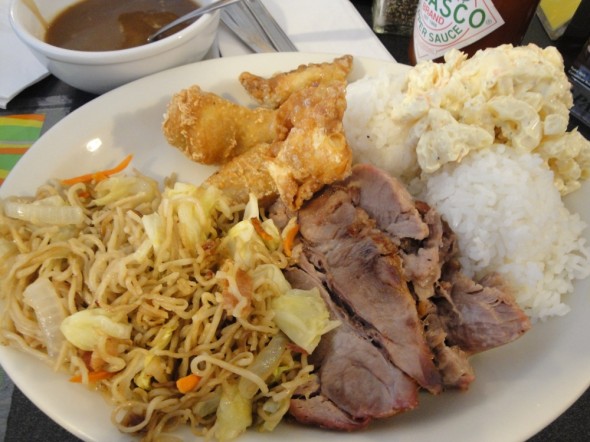 We have come to this place twice and both times I have ordered this combo plate. I don’t mind ox tail soup but I like something more substantial. The roast pork is really good. They give you a side of gravy to dip it in but it isn’t necessary. The pork is seasoned enough that it holds its own. It is a tamed down version of Mariposa Cafe’s roast pork. On top of the plate are 2 crispy won tons and 2 wing dings, which are chicken drumettes. The won tons are tasty but I didn’t get to enjoy them too much since the Princess liked them even more and ate all of mine plus an order of her own. The wing dings are really tasty too. They have a tasty breading that isn’t too crispy but packs a perfect amount of flavor, a tamed down version of New Golden Daisy in San Francisco. But the underrated part of this dish would be the chow mein. At first glance it looks like any ordinary chow mein but upon further inspection I found out that this is actually chow mein with bacon….BACON!!! That alone is worth a club. 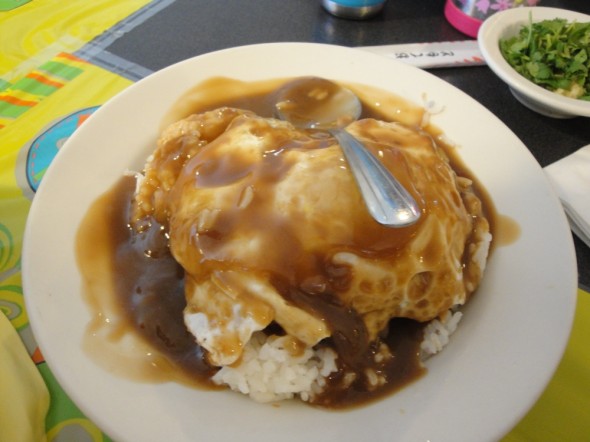 We ordered the kids a loco moco, which is a hamburger patty on top of a bed of rice with a fried egg on top smothered in brown gravy. It was a pretty standard dish but the kids enjoyed it and that in itself makes it a winner.

The nice thing was that we had leftovers and put them into our cooler but we left our cooler behind. We called the restaurant a couple days later and they said that they did have our cooler but they threw out our food because they didn’t want our cooler to smell. Gotta love the Hawaiian hospitality.