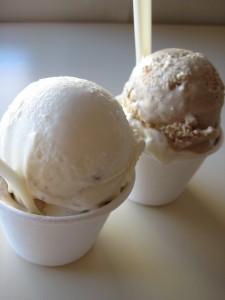 In the height of Bi-Rite‘s popularity, another Mission district creamery attempts to steal the crown. Humphry Slocombe made its debut to the masses on this years 7×7 100 Things to Try Before You Die list for its Secret Breakfast ice cream (bourbon with corn flakes). Unlike Bi-Rite’s tasty-sounding assortment of flavors, Humphry Slocombe is famous for their more unusual flavors such as Boccalone Prosciutto, McEvoy Olive Oil, Foie Gras and Peanut Butter Curry. When comparing the 2 creameries, both are great but I’d much rather go to Bi-Rite to satisfy a craving for ice cream.

There’s no way there could NOT be a line at this place, especially with flavors like that. K and I waited about 40 minutes before we got to the front of the line. In the meantime, we were serenaded with “I Should Tell You” from the musical Rent by other ice cream-goers.

The reason why the line takes so long is because everyone is tasting 3-4 flavors of ice cream at the counter. Humphry’s has about 10-12 flavors a day and rotate through an array of 100+ flavors.

We tried several flavors such as Balsamic Caramel, Cinnamon Brittle and Jesus Juice (Coke and red wine) before deciding on Secret Breakfast and Blue Bottle Vietnamese Coffee. What’s great about Humphry’s ice cream is that they really capture the fresh flavors of their ingredients. It’s almost as if you’re eating the real thing not in ice cream form. However, a downside of their ice cream is that there’s so much butter fat from the cream, it created a film on the roof of my mouth.

Secret Breakfast – This is Humphry’s signature ice cream flavor. Blue Bottle actually sells a scoop of this ice cream with a shot of espresso, called an “Affogato.” I give Humphry’s kudos for their originality, but I really didn’t think all too much of this ice cream. It could be because I’m not a fan of strong alcoholic flavors in my desserts.

Humphry Slocombe is probably not a place to frequent often, but it’s a definite must-try for its gimmicky flavors. It’s also fun to walk around that area of the Mission to discover other hidden neighborhood gems. There’s even a luchador (Mexican wrestler) mask store a block away! Fun!