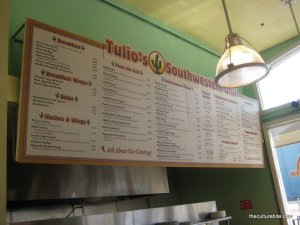 Nothing special about this “Southwestern” joint. I don’t understand their deal though. They call themselves a Southwestern restaurant with “wraps” on their menu when really it’s a Mexican place that serves burritos. There’s really no real good option for Mexican food down in the FiDi, and still Tulio’s is underwhelming.

Do not eat outside! It may look appealing at first during a beautiful day in the city, but watch out for the nasty pigeons that try to swoop in. They are not afraid of humans and they will stand on the table to watch you eat.

They have a limited selection of salsas at the salsa bar, none of which are spicy which was a little disappointing. On my last trip to Tulio’s, I thought I’d ask to see if they had Tapatio in the back since, hey, everything tastes better with Tapatio. Sure enough, they had it! They poured me a heaping cupful for me to dip my burrito in.

My usual is the El Nino wrap. I did have a shrimp taco phase for a while but quickly vanished after I tried the nearly $8 2 Baja shrimp taco combo here. The shrimp were tiny since it was cooked to death until all moisture was removed.

El Nino Wrap w/ Spicy Chicken ($5.85) – I’ve also had this with carne asada, but the meat was too dry. I decided to try the spicy chicken since I knew they had no hot sauces at the salad bar. The burrito was satisfactory – a little light on the filling. There was a whole side to my burrito that was just the tortilla. The meat was juicy and the sauce had a little kick. All things were good once I had my Tapatio sauce. Yum.

Every order comes with home made chips. They’re pretty good. Very lightly salted, so you don’t feel so guilty.

All in all, Tulio’s is really nothing special.  I’m on a hunt for a good Mexican place in the FiDi, so please holler if you think of one.