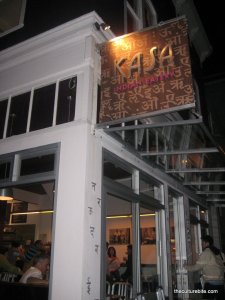 So, over the weekend, K and I decided to try a new place for the blog. We found Kasa in the Castro and read it’s the best authentic Indian food under $15.

What was off-putting about Kasa was the Panda Express style food bins. Who knows how long food has been sitting there.

To order, you first choose if you want a Thali (plate) or a Kati roll (think Indian burrito). If you get the Thali, you get a choice of 2 different curries. The Kati roll contains one kind of curry but is wrapped in a buttery roti (thin bread) with marinated onions and chutney. I have never seen anything like that before and at $4.50 each, you can’t go wrong.

Thali – I actually wasn’t too impressed with this. The plate was huge, but there really wasn’t much of the Chicken Tikka Masala or the Ghobi Aloo on it. The server was carefully assembling the curries in the small divider portion of the 24″ plate. I felt kind of ripped off since I was paying $10.95 for this. There wasn’t even enough rice for the small amount of curry. A majority of the plate was covered with different kinds of salads that I didn’t even touch. There was chutney, red onion salad, a mix of raw veggies, and lentils. The lentils were great, but I was still hungry after my meal.

Kati Rolls – I took a bite of K’s and it was pretty good. I don’t eat onions or whatever’s in the chutney, but it tasted pretty good to me. At Kasa, it seems like the kati rolls are the way to go. The Karahi Paneer tasted very similar to fresh mozzarella. I’ve never had Indian cheese before, so it was an interesting experience. For the big eaters out there, you can definitely get full on 2 Kati Rolls for $9 total rather than the $11 plate.

Mango Lassi – I’ve never had Mango Lassi before and decided that night to try it. Wow, it is definitely not my cup of tea. It’ s like drinking a heavy yogurt with a hint of mango flavor and a strong taste of spices that seem like they shouldn’t even be mixed with a sweet delicious fruit.

Despite the rave reviews on 7×7 and Yelp, I don’t think I’ll be coming back to Kasa. I might just be too picky of an eater to really enjoy what they serve.