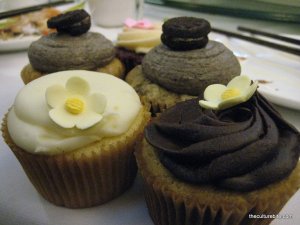 My friend Esa is obsessed with these cupcakes, and I totally understand why! It really is one of the best cupcakes in San Francisco. My friend recently purchased 300 cupcakes for a wedding, so I was lucky enough to taste 2 cupcakes. Yum!

The owner has recently quit her full time job to open up a shop for moonbabycakes. I have no idea where the location will be, but I’m excited.

The cakes are $3 each, typical for any other designer cupcake. I’ve only tried the Oreo, Red Velvet and the Chocolate Banana, but I’ve already decided the Oreo flavor is the best cupcake I’ve ever had.

Chocolate Banana – This one was a little strange. It’s loaded with bananas and has a rich chocolate frosting on top. I think it wasn’t my favorite because it seemed too healthy. It was more like a muffin rather than a cupcake.

I’m excited for the owner to open her shop so I can try all the other flavors.