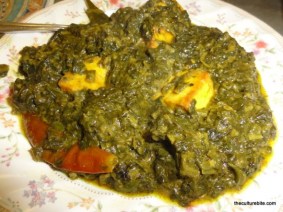 For some odd reason, I’ve been craving a lot of Indian/PakistaniÂ food lately. I’ve been wanting to eat it once a week and I’m hating myself for that since it’s never a light meal. In this tiny hole in the wall in the Tenderloin, I wondered if my hands were cleaner than the food I was about to eat. But in any case,Â K and I tried the Palak Paneer (spinach and Indian cheese) and our usual Chicken Tikka Masala (tandoori chicken in a creamy tomato sauce) with a side of basmati rice and naan. The Palak Paneer is one of the better one’s I’ve had. It’s thick, creamy, and packs a little heat. The cheese (or tofu rather) is a little firmer than what I’m used to. The Chicken Tikka Masala was very aromatic and flavorful. The only problem was that the chicken was a little overcooked. Overall, the fare is pretty good here. Best part of the meal was the hot and fluffy naan. I’d say it has the best naan in the city.