Today, I was alone while journeying through Sydney.  Sam was busy with a conference for work , so I decided to take the opportunity to hop on a train and check out the Sydney suburbs.  I rushed into the Town Hall train station, jumped on the Inner West train, looking back only because the only seat available was facing the back of the train.

My first stop brought me to a little Portuguese community called Petersham.  I jumped out of the train and left the smell of the train, to an open air station with one exit.  I followed a few people around, and just looked at the interesting home architecture and the crazy water tower that stood up on a hill behind the homes in the area until I found New Canterbury Road.  This was an interesting little block, I walked with some old Portuguese ladies, who were all too happy to say ‘hi’ to their friends as they crossed the street.  Why were these ladies so happy?  I was just about to find out. 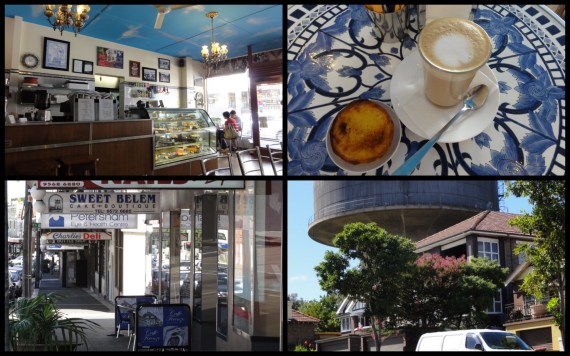 I looked inside this shop and saw three elderly people drinking coffee and sharing stories like old friends should.  I knew this was my place.  Looking at the bakery window, I see cakes, buns, and then I see it.  The sun was shining through the window right on the golden tarts as if it was calling to me.  The custard looked firm, yet moist, and the crust looked like hundreds of tiny crunchy flakes ready to break off and melt in my mouth.  “I’ll take one Portuguese custard tart and a latte, please.” “Eat here, or take away?” the young barista asked.  “Eat here,” I said hastily, something like that shouldn’t wait unless it was absolutely necessary.  It didn’t take long for my latte and tart to come.  The latte itself was pretty standard fare, so I won’t say too much about that.  The custard on the hand, was everything I explained and then some.  The egg custard was tasty and not too sweet, the crust was buttery and flaky, and the little sprinkle of cinnamon added that little bit of goodness that brought this over the edge.  I ordered one to go, and picked up one last bit of goodness before heading to Darling Harbour. 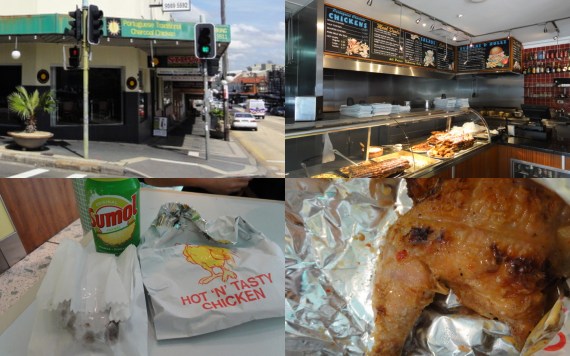 It was getting close to lunchtime and I had to bring something extra good with me to meet up with Sam.  Across the street from Sweet Belem was a huge sign that said Traditional Portuguese Charcoal Chicken.  I ran inside and ordered a quarter chicken.  The woman at the counter asked, “Tangy or Spicy?”, my mouth watered and I said, “Yes.” “Sir, sir, please choose one.” “Both please.”  “That I can do.” I watched as she chopped up a quarter of a chicken, and brushed the Tangy sauce and then brushed the Spicy sauce, and placed it in a foil bag and in a plastic bag.  Oh man, the smell was wonderful!  I rushed back to the station and hopped on the Inner West and got off at Town Hall.  I sent Sam an email that I was at the Convention Center.  We sat in the mall close by, and we opened up my goody bags.  The chicken was still warm, and on the first cut, was still juicy.  The taste that really makes it is the Piri Piri sauce.  Garlic, butter, chillies, and citrus hitting all my tastebuds.  This is definitely something I will have to look for in San Francisco. 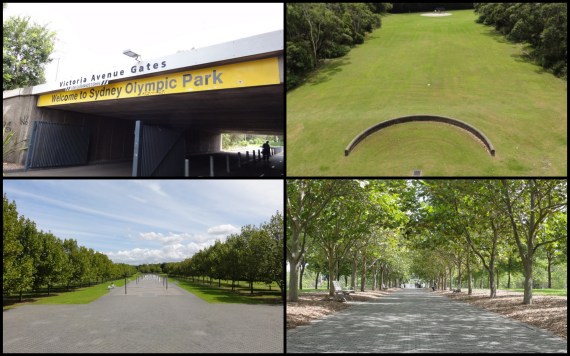 After lunch, I decided to hop on another train towards the Olympic Park.  The train from Darling Harbour is the Northern Line, taking it from Town Hall to the Concord West Station.  I could have continued on a special train to the Olympic Park station, however I wanted to walk through Bicentennial Park towards the Olympic Stadium and Aquatic Park.  Upon entry into the park, I found families having picnics and organizations running events on really large fields.  I decided to follow this businessman and and jogger further into the park towards what looked like a huge tower.  A handful of people were just strolling through the park or exercising, and no one was climbing to the top of the tower.  I saw a staircase, and decided to make the climb.  The view from the top was mediocre at best.  No wonder there was no one else climbing the Treillage Tower.  I had a view of the park I walked through, a river, and the city line… oh and Ikea! 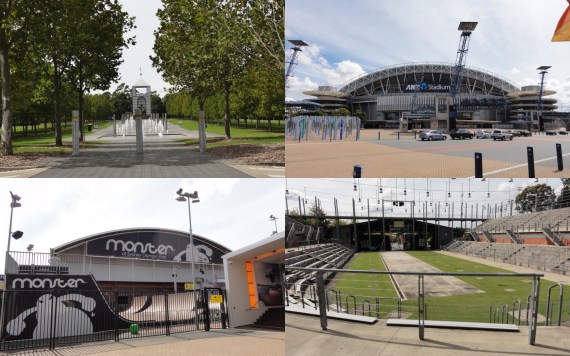 In the year 2000, the Summer Olympic Games were held in Sydney.  The Sydney Olympic Park is quite a sight.  I checked out the Aquatic Park, ANZ Stadium, Allphones Arena, and the grand Sydney Showgrounds.  The coolest thing I saw there was the Monster Skate Park.  There was a group of Japanese tourists learning how to skateboard by Australian skateboarders.  After a while, I got a little lost and ended up at a convention center with a lot of loud music, and a guy shouting encouragement and numbers.  I peeked inside and saw a bunch of people punching the air and jumping around.  Ah, a sign said, “Train the Trainers.”  And seeing the fitness level of the people inside, I realized I was at a fitness trainers seminar.  Definitely not what I was expecting. 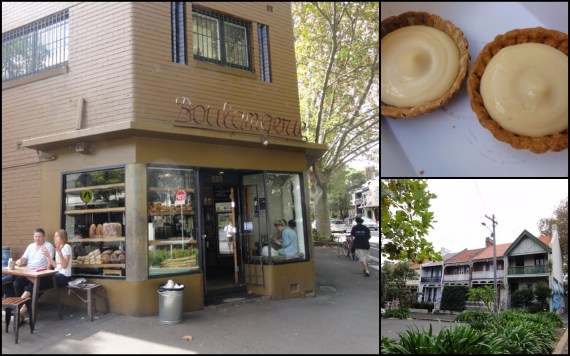 After walking around for about 3 hours, I decided it was time to return.  While sitting patiently on the train, I remembered hearing about a bakery in the Surry Hills area.  Bourke Street Bakery is about a mile from the closest train station, Central Station.  The walk is pretty nice, you walk through Ultimo into Surry Hills.  The style of the homes in this area seem Victorian with some a lot of metal fences.  I thought they were pretty unique and interesting to look at.  The people here reminded me of Noe Valley in San Francisco, a lot of young families, hipsters and dogs.  I finally reached Bourke Street Bakery, and waited in a 4 person line.  By the time it was my turn, the clerk was pretty rude. “What?” “I’d like two Lemon Curd Tarts please.” “You want what?” “Two Lemon Curd Tarts.” Rolls eyes. “$9.” Hmm… it doesn’t sound that rude when I type it out, but trust me, I felt like I wasn’t wanted.

The Lemon Tarts were pretty delicious.  Lemon custard surrounded by a flaky crust.   How can you go wrong?  First bite you crack the crust a bit and let the lemon custard goodness attack your tastebuds with that sweet, tangy cream.  Despite the rude clerk, I would still make the trek here to try their other pastries. 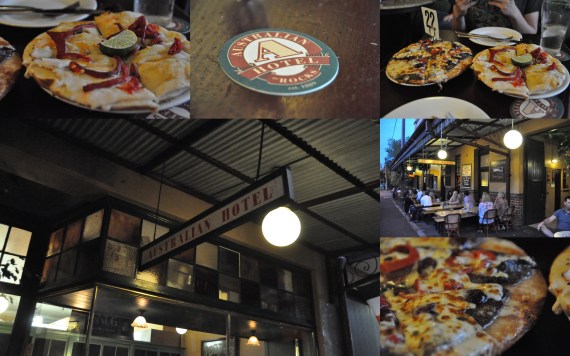 After bringing that second tart to Sam, we headed out for dinner.  Sam had asked her Australian coworkers about a good place to try Kangaroo and Crocodile meat.   I was pretty excited to try Kangaroo.  The place is called The Australian Hotel” and is located in The Rocks.  We entered the bar/restaurant and asked for a table for two.  The server just told us to pick a seat anywhere that’s open, so we found one by a window away from the bar.  After sitting for about 5 minutes, I noticed a sign that said, “Please order all drinks and food at the bar.”  So, Sam went over to the bar and made our order of Pepper Kangaroo Pizza and Salt Water Crocodile Pizza.  The crust on both pizzas is thick.  Definitely, not the fancy thin crust that we’re used to with Napoletana pizzas.  The Kangaroo is marinated in pepper and sliced thin on top of a bed of roasted capsicum and cranberries.  The Crocodile is also thinly sliced but is on a bed of thai basil and coconut cream sauce.  Croc meat tastes like fish and chicken marinated in mud, not my favorite.  Kangaroo was tough and gamey, and I can tell they marinate it in Pepper to add some taste.  The staff at Australian Hotel is very friendly, but I would definitely want to try some of the other stuff on the menu next time, i.e. Roast Peking Duck Pizza!