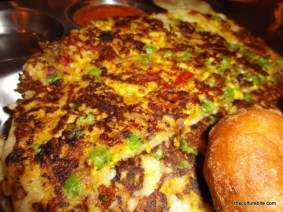 K, T and I ventured to the Mission to try the famed Dosa. It was going to take forever and a day to get a table, so we walked one block over to Udupi Palace which served the same kind of food. I had remembered this place from my coworker who was teaching me the difference between northern and southern Indian cuisine. He said this was the place to go if I wanted to try authentic southern Indian food. So, here I came.

The restaurant was completely foreign for me. I couldn’t understand most of what was on the menu, but I was excited to shock my taste buds. Each item on every other surrounding table was pretty impressive. One looked like a 3 foot cornucopia of some sort, but I couldn’t pinpoint what it was on the menu.

Prices are very reasonable too. I spent about $7-$8 per dish.

We each had the Udupi special which comes with a dosa or a uthaappam with an idly, a white spongy rice cake, and Medhu Vada, a fried lentil donut. It’s kind of nice having the idly as a side because it acts as a neutralizer for the very fragrant uthappam. The idly is paired with a bowl of brothy vegetable soup called samber. It’s pretty much a minestrone minus the pasta. I was not a fan of the Medhu Vada though. It looks like a plain donut, the kind you dip in your coffee, but its looks are deceiving. The donut is filled with spices, lentils and onions. It definitely confused my taste buds because I was initially expecting something sweet.

Gobi Uthappam – I really wanted to try a dosa, kind of like a huge Indian crepe, but the uthappam caught my attention. The gobi uthappam is a dense lentil pancake filled with spicy cauliflower. My favorite part of the dish was the 3 sauces that went with the pancake. One spicy, one creamy, one mild. Naturally, I loved the spicy sauce the best.

I fairly enjoyed my meal at Udupi. It’s not a place I’ll crave several times a month, but they do serve interesting food. If you’re used to the type of Indian food with curries and stews (like I am), this is not your place. But if you’re sick of that, then this is the place for you. It’s different and it doesn’t disappoint.