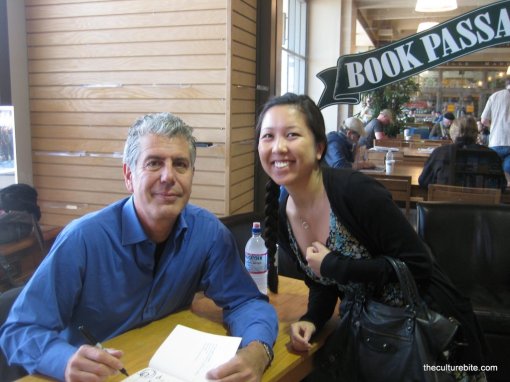 Here I am meeting the greatest food critic of my time. (I’m really bummed this picture is blurry.) Tony Bourdain has a pretty tough act on his show, but I was truly impressed by how genuine and down-to-earth he is.

First of all, he was scheduled to show up at 10am, but instead, he came at 9:30 and began signing. I arrived at the Book Passage in the Ferry Building at about 8:30am and was the 20th person in line.

I was so nervous when I met him, I made some lame small talk about how I have a food blog and that I started it because of him. He asked me what the name of the blog is and told me he’d check it out. Of course, I know he won’t since I’m sure 100 other people told him they had a food blog, but it was just nice that he offered.

Anyway, I walked away a very happy Bourdain fan and with 2 signed books! BTW, he is TALL!

One Response to “Meeting Anthony Bourdain”