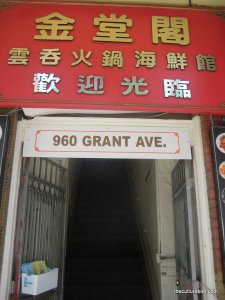 It’s really hard for me to find a good Chinese restaurant in Chinatown. I enjoy Capital Restaurant and Hing Lung, but I was looking for something new. I chose this place because I was craving clay pot rice, but was disappointed when they didn’t have it on their menu. In general, food is tasty, but service is beyond sub par.

I hesitated entering the restaurant because of the shady stairwell entrance. You would’ve never known this was a restaurant if you didn’t look up the address on Yelp. The restaurant is obviously a local favorite because there was a line to be seated at the top of the stairs.

Service is probably one of the worst ever. My mom and I came in speaking English, so they had no idea my mother understood their language. One of the waitresses asked what kind of tea we wanted, and the other waiter (who I assume is the owner) yelled at her by saying “what kind of tea?!” like he didn’t want to offer us any other kind. We also waited about half an hour before we got our food – definitely not a quick lunch spot.

We ordered off the lunch menu and got preserved egg and salted pork porridge and braised tofu in a hotpot. Prices are cheap. It was about $12 for 2 dishes. Before our meal, we got a ginsing soup that was very light and refreshing.

Preserved egg and salted pork porridge – The porridge (jook) was a good consistency – thick and creamy. The only downside was that there was ginger in the jook.

Braised tofu in a hotpot – This was very delicious. I saw a few tables with this dish, so I assume it’s a crowd favorite. The braised tofu is stewed in a thick gravy with bok choy and shitaki mushrooms. The bok choy was one of the freshest I’ve ever had, but it was quite dirty towards the stem. It could’ve used a better rinse.

Although I really should not be expecting much from a Chinese restaurant in Chinatown, I probably won’t be back here because of the lack of cleanliness and the poor service. 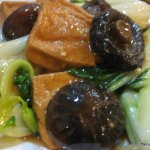 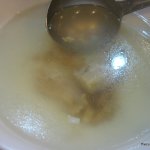 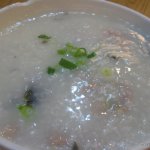 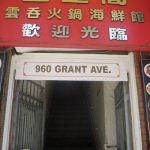