We’ve been meaning to try Michael Mina’s for a long time. We debated between the SF and the Vegas one and decided eat at the SF one because there are so many other restaurants to eat at in Vegas. We’ve heard so much about Michael Mina’s restaurant so to celebrate a birthday we decided to indulge ourselves and go out to dinner there. First off, the ambiance is incredible. The windows face Union Square so at night you get a very nice view of the square.

We decided to document our experience there with pictures so first off here was the bread that we had.

There isn’t a whole lot to write about here except that it was just bread and butter. Not hot bread, not warm bread. Just room temperature bread. But since we were hungry it more than satisfied us. 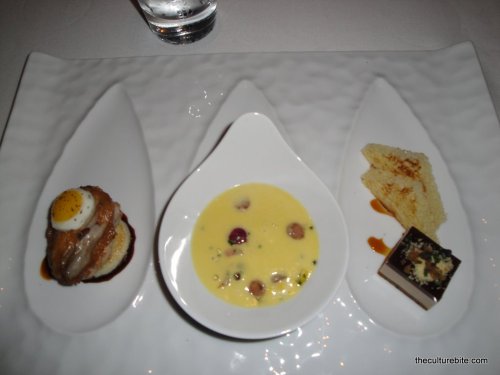 This was a pretty darn good appetizer except for that little brown square on the right. That is fois gras. This was my first and most likely last time I have it. I wasn’t going to even try it at first but I figured since we were paying so much for the meal I should give it a try. And plus all these fancy restaurants serve it so what the heck, right? It wasn’t very good. It tasted like super salty jelly. The dish on the far left was a roast quail leg with a quail egg on top of it. The quail was cooked perfectly. It didn’t taste gamey at all and was very flavorful. The middle dish was a corn chowder with pieces of quail in it. Delish!! My favorite of the 3.

Our other appetizer was on the 7X7 top 100 Things To Try Before You Die list: The tuna tartare. 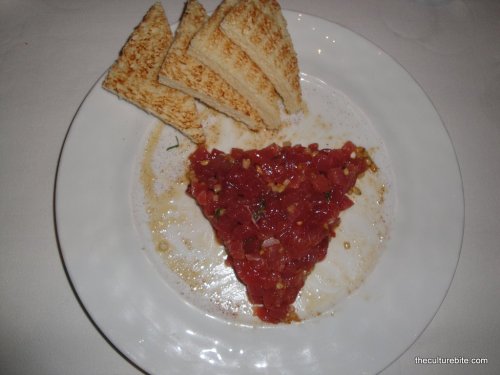 Ok…the idea of raw fish is pretty gross to me but I figured since it’s one of the things I need to try before I die, then I’ll suck it up and go for it. And you know what? It wasn’t half bad. The way they present it is really interesting. They brought it out as a cylinder shaped blob of raw fish. Then the waiter diced it up and shaped it into the triangle form you see above. The first bite made me a bit squeemish but the flavors were so intense that I overlooked the funky raw fish texture. The only drawback is that the portion is super huge so if you don’t like eating raw fish, it becomes more of a chore by then end of the dish.

After digesting our appetizers, our entrees were brought. I went for the Brandt Farm Beef. 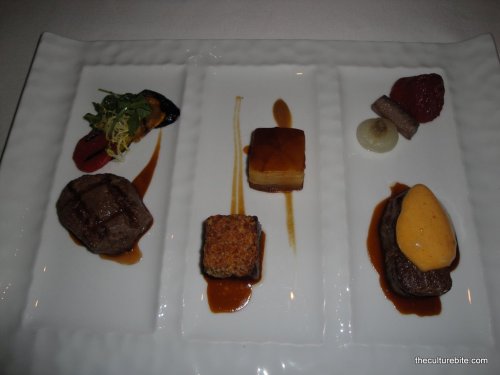 The portion on the left is the Filet Mignon. The middle portion is the Braised Short Rib â€˜Bourguignonâ€™, Russet Potato Gnocchi. The portion on the right is the Dry Aged Rib Eye, Celeriac PurÃ©e, Bone Marrow Flan. My favorite of these 3 was the short rib, hands down. It was super tender and juicy. The sauce accented the meat perfectly. You can tell that this piece of meat was marinated and cooked with all these flavors infused in them. The rib eye is my favorite cut of steak so I was expecting a lot out of this one. It was pretty good but it didn’t blow me away. It was cooked well but the flavors didn’t scream, “enjoy the heck out of me!!” The filet mignon was ok but lacked a lot of the flavor the other 2 cuts did.

The other entree we got was the lobster pot pie which has moved it’s way on to the 2010 version of the 7X7 Top 100 Things To Try Before You Die list. 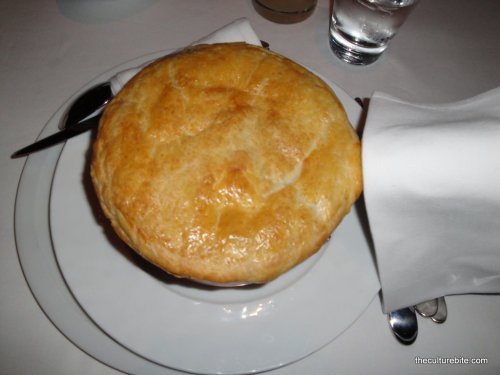 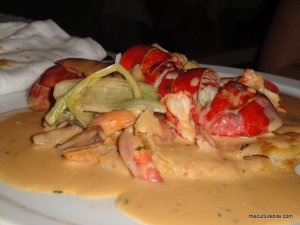 The presentation of this dish is almost worth the price alone. The waiter brought it out this large copper pot and we were both in awe of the sheer size of the dish. There was a huge flaky crust on top of the pot and it looked really delicious already. The waiter proceeded to then cut open the top and inside was an entire lobster tail with gravy and vegetables. He then proceeded to put together the presentation you see above.Â  Might I say the taste was as good as it looked. The crust was flaky and buttery (2 prerequisites of any pot pie), the gravy was creamy, and the lobster was cooked just right. I think I want to go get one now.

We concluded our meal with desserts of course. We got the Michael Mina’s Signature Root Beer Float with Warm Chocolate Chip Cookies. We’ve heard nothing but great reviews about the float so we had to try it. 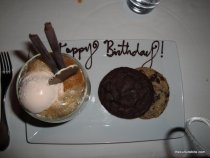 Our verdict? It was pretty good but it wasn’t the best thing we’ve ever had. They do a really nice job in making this something special though. They use homemade root beer with vanilla ice cream but they also throw in a sarsaparilla slush to give the authentic taste of old fashioned root beer. The cookies were good but nothing extraordinary.

Our other dessert was the raspberries verbena with meringue and lemon cream. 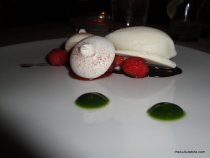 This was actually surprisingly really good too. The raspberries were crisp and slightly tart. The lemon cream was smooth and refreshing and the meringue melted in our mouths.Â  After eating all this stuff, we were completely stuff. But wait! Michael Mina’s had something else in store for us too!

The black circles are black cherry jellies and the rectangles are mini smores! How awesome is that?!? These little treats were the topper to a fantastic meal. Even though we were stuffed we still managed to pound these treats down too. All in all, a great meal – a definite recommend. â™£â™£â™£â™£