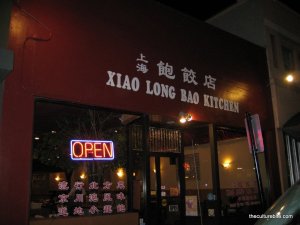 I’m a huge fan of Shanghainese food. The dumplings, the hot sauce, the noodles – they’re all good.

My brother told me about this new restaurant that opened up in South San Francisco and I knew I had to try it out. Apparently, it is the sister restaurant to Shanghai Dumpling Shop in Millbrae.

I’m a HUGE fan of Shanghai Dumpling King on Balboa in SF, but I think I’ve found a new top favorite.

Because it has only been open for a month, the restaurant is very clean. The smell of the new vinyl from the booths is a little off putting, but at least you know it isn’t dirty.

The wait staff is very friendly and there’s no wait (yet).

It was around $40 without tip for 4 people; a little pricier than SDK. I recommend you go with a group so you can try several dishes.

Jicai and Tofu Soup – I have never figured out what kind of vegetable jicai is. It’s very similar to a pea sprout or watercress. It’s mild in flavor and the baby leaves are very tender. The soup is hands down better than the one at Shanghai Dumpling King. The broth is clean and light and packed with loads of jicai and tofu.

Spicy wontons – I’ve had several different variations of this dish. Some use only chili oil, some add in peanut sauce. None have ever been better than Shanghai Palace (now closed) in Vancouver, but some are pretty darn close. This variation featured a meaty wonton with a thin skin topped with chili oil, peanut sauce and green onions. They were good!

Xiao Long Bao (soup dumplings) – I was skeptical at first because it was nearly $7 for 8 dumplings, but when they arrived at our table, they were huge! The skins were all still in tact and they didn’t break when I picked it up. It was thick enough to be picked up by chopsticks, but thin enough so the skin wasn’t overbearing. When I bit into the dumpling, the soup poured out of the meat and into my mouth. It was so delicious. Although very different, it’s a good match up for the soup dumplings at SDK.

Stir-fried Shanghainese Noodles – I can never tell if these Shanghainese restaurants make these noodles on their own or if they buy them this way. These noodles looked homemade and they had a good consistnecy. Usually, this dish can be over-bearing with tough pork, but everything in this dish was just right.

Stir-fried Rice Cakes with Jicai and Pork – It’s very rare to find a restuurant that can make this dish without being mushy. SDK used to do this well, but they changed suppliers of their rice cakes so now I can never order this again. Most of the rice cakes in the dish were a good chewy consistency, but I found a few in the dish that were mushy.

Egg and Mochi Soup Dessert – This dessert came free with our meal. It’s so strange to have mochi and egg in a sweet dessert soup, but it worked. It was delicious and it warmed us up before we headed out in the rain.