I went here a couple months ago with a group of 7 people. My friend was raving about it and said we had try the place. So, K and I decided to take the 1 hour trek down to San Jose after work to see what the fuss was about. When we drove into the parking lot, I could see the horde of Asians crowding the front door. I didn’t realize Cajun crawdads and shrimp were such a hit with Asians! Luckily K and I were already an hour late (since we were the only ones coming from SF), and a member of our group already had our name down on the waiting list. I walked up to the hostess to see how much time we had left. She checked her list and said, “You’ve only been here an hour.” I was shocked! Only an hour? How much longer do I have to wait? She then politely said, “It’s going to be about another 45 minutes.” Thank goodness there was a Target nearby to kill some time.

When we finally sat down to eat, one of our friends was well-versed in The Boiling Crab menu, so we gave him the liberty to order. We ended up getting a mix of mild and spicy shrimp and crawdads with a couple of corn and sausages in “The Whole Sha-Bang!” seasoning (Rajun Cajun, Lemon Pepper and Garlic Butter) â€“ about 4 pounds each. Boy, the sauce was delicious! I would bathe in it if I could! The only pain was that I was a slow eater and I couldn’t keep up with anyone. The crawfish was so small, it almost wasn’t worth all the effort of peeling them. I felt most of the weight came from the claws, which to me, is kind of a rip off. Actually, most of us were fighting for the shrimp because they were more filling than the crawdads. We ended up adding on 4 more pounds of shrimp and an additional 2 pounds of crawdads to get us full. For sides, we ordered the Cajun fries and the sweet potato fries. I LOVED the sweet potato fries. They were the skinny kind of fries that were super fried. I was prepared to fork over $30 per person for this feast, but it ended up only coming out to about $12 a personâ€“great deal for what we ate.

All-in-all, if you’re willing to wait 2 hours, I’d recommend going here at least once. Don’t go too often or else you’ll get a heart attack from the delicious butter sauce. 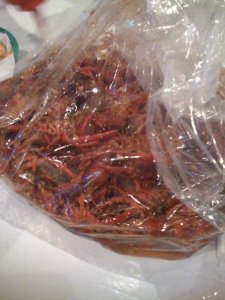 One Response to “The Boiling Crab – San Jose”