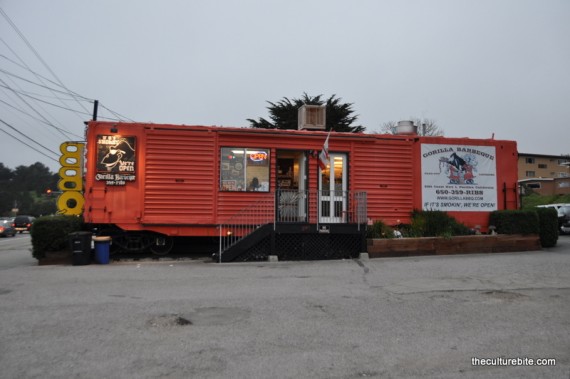 One Friday after work, K and I were craving some barbeque and decided to head down to Pacifica. I remembered seeing Gorilla BBQ on an episode of Diners, Drive-ins and Dives on the Food Network once, so I suggested we try it out. The motto by the front door read, “If it’s smokin’, we’re open.” I looked up and saw the smoke piping out of the roof of their train car shaped restaurant. 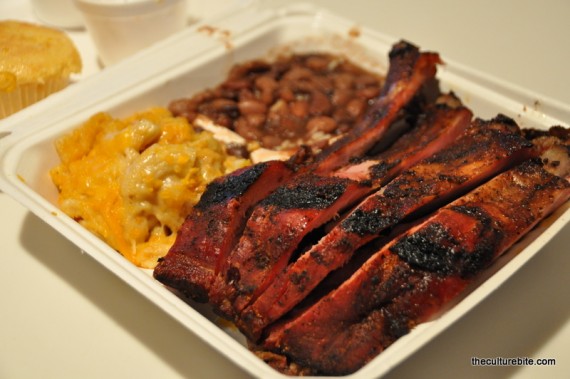 We were warned that the portions were huge, so K and I shared a 2 item combo with pork ribs and pulled pork and sides of beans and rice, mac n cheese and a corn muffin. It required a lot of self-control to not sneak a taste in the car, but I managed to hold on for the 20 minute ride home. Once home, K and I ripped open the box and dug in. The pork ribs were so tender, smokey and succulent. It had a good bark and the meat fell right off the bone. The pulled pork was very tender and packed with lots of sweet sauce. Gorilla serves their meat dry and packs a few containers of their BBQ sauce with every order. The only disappointment in the meal was the sauce. It tasted almost like a fruit sauce; it was missing it’s tang. As for our sides, the corn muffin was moist, the mac n cheese creamy and the beans and rice soft and warming.

Although the barbequing of the meets were executed perfectly, I’m going to knock off one star for the sauce.