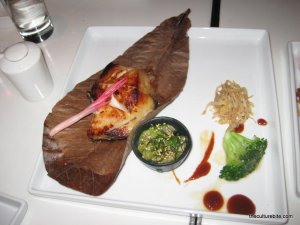 A couple months ago, the girls and I went on a celebrity-hunting trip to LA. We decided to hit up Hollywood’s hot spots just to catch a glimpse of C-list celebs. When researching restaurants, I noticed most of the places (Katsuya, Mr. Chow, Ivy, Koi, etc) are all rated pretty poorly on Yelp, which leads me to believe celebs like eating terrible food.

Well with that in mind, we decided to eat at Katsuya anyway. Service was good, but the food was mediocre. The meal was about $30 per person and valet is $10. Here’s my review:

When you first walk into the restaurant, you’re led into the bar where you wait for your table. They sat us on the right side of the restaurant, which I believe is the non-celebrity side. The light is dim and the restaurant is loud; typical Hollywood setting. Katsuya is filled with the beautiful type – tall, blonde, skinny. We found one celeb at the end of the night. It was Kat Von D, the famous tattoo artist. Wow, that woman is huge!

Creamy Rock Shrimp – It was pretty much walnut prawns in a sushi. Nothing too special

Miso Marinated Black Cod – This was a disappointment. The fish was cold, so we sent it back for a new one. The second piece of cod we received was half the size of our original fish.

Yellowtail Jalapeno Roll – Best dish of the night. Super small though. We only had enough for two 1-inch bites per person.

Eggplant Stuffed w/Albacore Miso and Almonds – This one was interesting at first since I’ve never had anything like it before. Then it got pretty sickening after the 3rd bite. It was strangely creamy and salty. There was some identifiable meat mixed in with the cubed eggplant, which striked me as off. It was probably the tuna but the texture was more like ground pork. The eggplant they use is American, not Japanese. So it was firm and crunchy rather than soft and smooth.

KobeÂ Tobanyaki – There were about 6 pieces of bite sized kobe beef served on a pile of wild mushrooms. As it was my first experience with kobe beef, I thought this dish was great. I just wish there was more meat in the dish. There were so many mushrooms, it almost seemed they were the star of the dish.

I kind of expected the food to be bad just because of it’s recognition in Hollywood. If I wanted real Japanese food, I’d go to someplace less pretentious with high reviews.