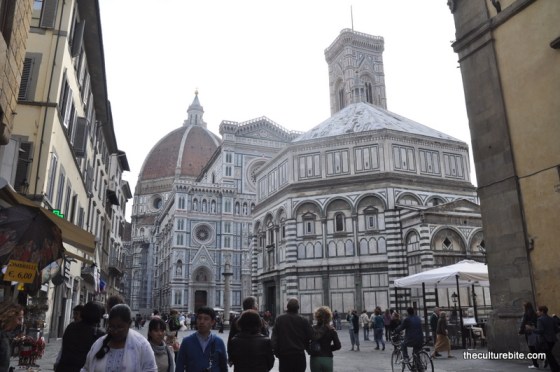 K and I landed in Florence, the birthplace of Italian Renaissance. We conveniently planned this on a Monday since most museums in Rome are closed on this day. The main purpose of this trip was to see the David at the Academia.

We started the day early at the Termini station where we purchased our fast train tickets. Usually a train to Florence could take about 3 hours, but the fast train (about 88 euros) got us there in about 1.5 hours. 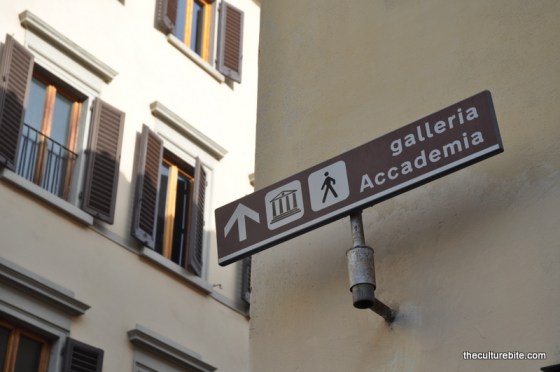 We waited at least 2 hours to get into the Academia. Note –  Book your reservation in advance! This gallery is small. The only main attraction here is the famous sculpture of David by Michaelangelo (which I couldn’t sneak a picture of). There were a few other statues and paintings, but nothing too famous. 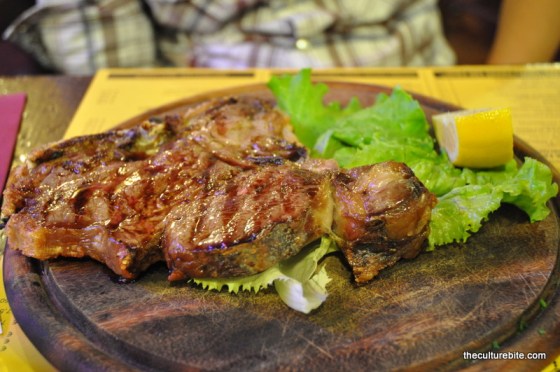 An hour later, we were out… and hungry. We scoured Florence for its famous Bistecca Fiorentina, a t-bone steak seasoned with high-quality olive oil. We found some for 50 euro, some for 30. Alas, a steak for 20 euros. K got the trademark dish, while I had the spaghetti carbonara, pasta with an egg and pancetta sauce. You know, you get what you paid for. The steak was satisfactory. Perfectly medium-rare, but too tough and flavorless. The carbonara was pretty good, but it could’ve use more pancetta. More “bacon” always makes things better. 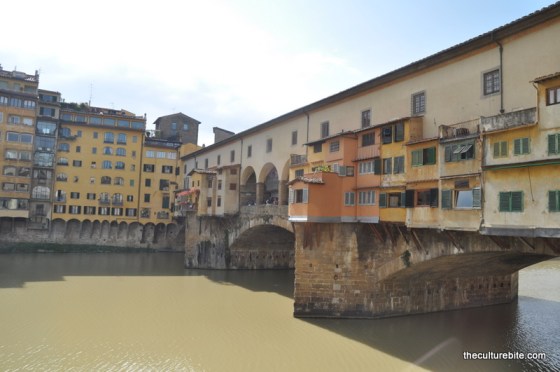 We were going to do the Ufizzi Gallery, but we didn’t want to stand in another line AND I figured we’d be sick of museums after this trip. So, we headed for the Ponte Vecchio, a medieval bridge filled with shops. A few snaps here and there and then we were off to the Basilica di Santa Maria del Fiore. This church is probably the largest structure in Florence. The domed cathedral in it’s gothic style is Florence’s crowned architectural jewel. The entrance was free, so we took a peek inside. It is massive, but for some reason, they didn’t let us into the dome, so I don’t have any good pictures. For 3 euros, you can also take an elevator up the tower for a city-wide view, but we, unfortunately, didn’t have the cash. 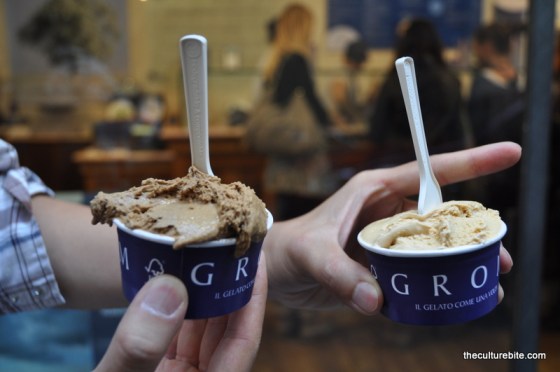 I did, however, have enough cash for gelato. While roaming through the streets of Florence, we found a HUGE crowd around this gelato place called Grom. I can never turn down ice cream, so by instinct, I stood in line. They had such interesting flavors, but the one that caught my eye was salted caramel. “Oh yeah, that’s what I’m getting,” I thought. K got coffee. Man this was good. The caramel was very dark and rich, almost bitter, but slightly sweet. The coffee was super strong, as if we were drinking an actual espresso. I can’t say this was better than Giolitti’s, but it’s definitely different.

The one thing I regret not doing in Florence is buying something. Florence is famous for its leather, so I should’ve purchased a pair of boots or a small cross-body bag. Leather is pretty cheap here. K got a small wallet for 10 euros and I could’ve got a pair of real leather boots for 30 euro. Ugh, I’m kicking myself. Shoulda, coulda, woulda.

We headed back for Rome in the early evening and caught a few more sites before we headed for dinner. We checked out Piazza di Popolo and Piazza del Repubblica. Both are large traffic circles that are beautifully lit at night time. 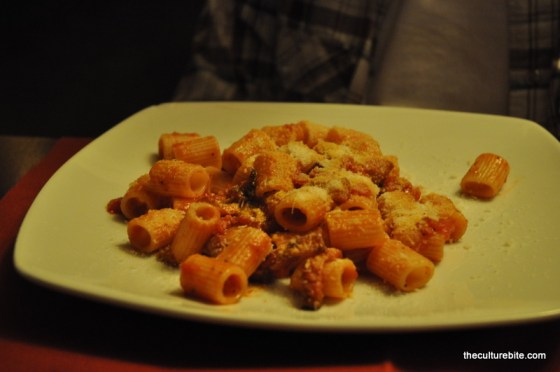 For dinner, I tried to make it to this restaurant in Trastevere that Anthony Bourdain went to, but it was closed! We landed at this other cute restaurant by the Tiber River called iVascellari. We started with a spinach and cured ham salad with some fresh pecorino cheese and really good olive oil and balsamic vinegar. Spinach in Rome is nothing like the spinach back home. The leaves here are larger, thicker and heartier. For our main course, we had the cacio e pepe, spaghetti with parmesan and pepper, and the amatriciana, rigatoni with a tomato and dried pork cheek sauce – both are very traditional Roman dishes. I’ve had tons of pasta on this trip and this dinner was the best. The pasta was perfectly al dente and they were both seasoned perfectly. My cacio e pepe was way better than the one I had our first night. It wasn’t drowning in a mysterious cream sauce. It was buttered and topped with tons of shredded parmesan. And the pepper in the dish, which is the main ingredient, was freshly ground and not overpowering. The amatriciana was very flavorful. You could taste the sweet chunks of tomatoes and the hidden pieces of salty pork in each pasta.

And that was the end of day 4…