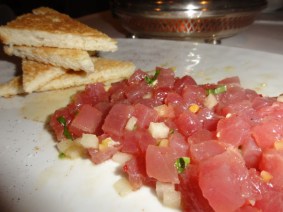 So, in my last post, I mentioned I didn’t make it out to Michael Mina with my whole group of friends. However, K decided to take me for some 1:1 time the night before my birthday. Michael Mina is definitely a special occasion restaurant, so I think it’s much more appreciated by a party of 2 rather than a large group.

I had no idea Michael Mina was in the Westin in Union Square. The restaurant looks more like a lobby bar than a restaurant, but the ambiance absolutely screams big-price-tag.

Service was phenomenal. Our waitress, Sam, was always attentive. She observed my need to take photos of every meal and advised me when to take photos of certain dishes (i.e. the lobster pot pie before it’s been assembled.)

After Sam described the menu, K and I quickly flipped back to the first page with the cheapest menu option, the prix fixe menu ($105/pp).

Amuse Bouche Trio – This was the opening number for every meal at Michael Mina and it definitely impresses. The trio is consisted of a shrimp tempura, an uni (sea urchin) flan, and hamachi tartare. It has a great “wow” factor. Each little item is packed with big flavor and it plays with each of your sensory buds on the tongue. A fun way to start the meal.

Tuna Tartare – If I had to choose my last meal on earth, I don’t think this would be it, but it came pretty darn close. The tartare is initially served with the ingredients – tuna, egg yolk, chili pepper, salt, basil, pine nuts, pears and sesame oil -Â laid out on the plate and then they mix it right there in front of you. The combination of ingredients in this dish is brilliant. It’s both sweet and nutty. And the fish is incredibly fresh, it was like eating straight butter. 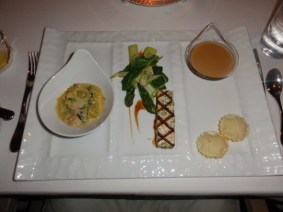 Spring Rabbit / Foie Gras – It is very rare to find rabbit on the menu. Â From the left, we had the pea tortellini, leg confit, and tarragon. Â I found this dish to be creamy and delicious. Â I would definitely look forward to having this again. Â In the middle, there was the Loin Terrine, California Asparagus, Â Meyer Lemon. Â I found the Loin Terrine to be slightly game-y but the Asparagus was delicious! Â And on the right, I had the Foie Gras Mousse, Radish, and Chive Wafer. Â I had no clue how to eat it, so, I placed the Chive Wafers into the Foie Gras Mousse like crackers in soup. Â This was the highlight of this dish. Â The Foie Gras was a little cold, but it tasted awesome.

Lobster Pot Pie – Wow, this is sinful. The pot pie is presented by one of the chefs in a copper pot. He then cuts off the top and assembles the entire lobster on your plate. The rich, creamy sauce along with the thumbelina carrots, potatoes, radishes and pearl onions is poured on top of the perfectly tender and succulent lobster.

Brandt Farm Beef – Fava Beans and Spring PotatosÂ – From the left, I had the Filet Mignon, Laratte Potato Puree, Ramp Jus. Â I barely remember the Filet Mignon, but the Potato Puree was really rich and creamy. Â Just my style. Â In the middle, I had the Grilled Ribeye, Crushed Fava Beans, and Potato Gaufrette. Â The Grilled Ribeye was a bit on the dry side. Â On the Right, there was the Braised Ox Tail, Morel Mushrooms, and Herb Salad. Â The Braised Ox Tail was really good. Â Definitely my favorite out of this dish. 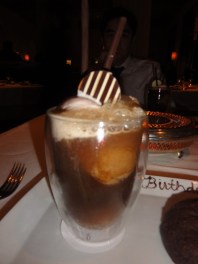 Root Beer Float – I initially ordered the dessert trio, but in mid-lobster, I switched it to the root beer float because I knew I would be pretty sad watching K eat his, while I had something else. The root beer float is made of 1 scoop of sassafras ice cream and 1 scoop of root beer sorbet with IBC root beer. On the side of the float are 2 warm cookies – 1 chocolate chip and 1 chocolate chip pecan. I was way too full to eat the cookies, but I was able to finish mine and help finish K’s. I took the cookies to go and ate them warm 2 days later. Mmm, so good.

At the end of the meal, we spoke with Sam, our waitress, and she told us they were closing down that location and reopening a boutique version of it at the old Aqua location on California. In place of the space in the Westin will be a steak restaurant also branded with the Michael Mina name. A grand opening party is supposed to happen in mid-October, but I’m not sure of the details. Â I hope I can get my name on that press list.