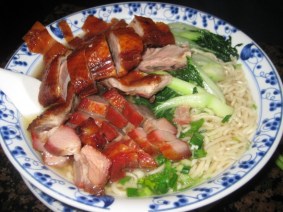 I have a tradition of coming here once of every week. You may think Chinese food tastes like all other Chinese food, but you have not tasted the BBQ combo housemade noodles at Mr. Fong’s. That dish will blow your mind; it’s so good.

Their Foster City location is no more, but Mr. Fong’s has taken over the Classic Bowl complex in South SF. First, they opened the fancier, banquet-style restaurant. Then, they opened this BBQ/noodle take-out joint. Now, they’re going to open up a bakery.

The BBQ/noodle restaurant is always packed, but for some reason, they’ve worked out a flow where you don’t have to wait long. I don’t think I’ve ever waited any longer than 5 minutes for this place.

Service is quick and friendly, the latter is definitely uncommon at a Chinese restaurant.

Last I came, I went with my family, so I was able to order a variety of dishes.

Clay Pot Rice w/Salted Fish and Chicken – I was so excited to see clay pot rice on their specials menu. Clay pot rice is a casserole dish made with rice and some kind of topping. The topping could be anything from chicken and mushrooms to frog legs and veggies. Yeah… I won’t be having any frog legs, but salted fish and chicken sounds good to me! The beset part about clay pot rice is the crunchy rice on the bottom of the casserole dish. Add some sweet black soy sauce and you’ll find comfort food at its best.

Porridge w/Preserved Egg – This is my go-to dish when I can’t make up my mind. Mr. Fong’s has about 200 items on their menu and it could take me forever to decide what to order. Their porridge is very fresh here. The rice stews in it’s own thickness, no corn starch needed. The flavor of the porridge is much more flavorful than other Chinese restaurants. I’m thinking they cook the porridge with some kind of chicken flavoring, whether that be bones or broth, I don’t know.

BBQ Combo Housemade Noodles – This is the jackpot. Well, anything on the housemade noodles menu is part of the jackpot. Mr. Fong’s has one of the best BBQed meats I’ve tasted in the Bay Area. It’s lean, tender and fresh. For the BBQ combo, you are allowed to pick any 2 kinds of meat from the BBQ counter. My choice: roast duck and BBQ pork. They are not shy about their meats here at Mr. Fong’s. You’ll find a large helping of the pork and duck lying on top of a massive bed of noodles and broth. The noodles really don’t look like anything special, but you’ll be surprised about the texture. It’s chewy! The broth is very meaty tasting, not sure if it’s MSG, but I won’t ask because I don’t want to know. It’s too darn good for me to care.

There are a million other things I’ve been wanting to try here. I’ve heard a lot about the fried ox tail from K’s boss. MUST try that next time.