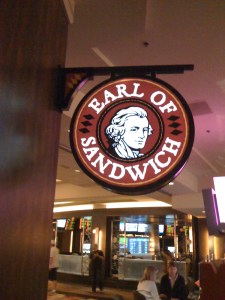 I just took a recent boys trip to Las Vegas and had the opportunity to sample some of the “Good Eats” on the strip. You’ve already heard about everyone’s favorite Vegas sandwich shop, Capriotti’s. Â It was our second day here after a long night of losing lots of money for fun, and I was trying to wake up my travel companions, Gorilla, Ken, Quagmire, Wawwy, and JC. Â Since some of us stayed at Planet Hollywood, we were looking for a quick lunch. Â We found the Earl of Sandwich while wandering the casino area and caught a glimpse of a video advertisement that said “The World’s Greatest Hot Sandwich.”

You’ll find the Earl of Sandwich in the Miracle Mile Shops mall connected to Planet Hollywood. Â It looks like Mcdonalds but fancier. Â If I were you, I wouldn’t expect much out of this place.

I had the Earl’s club Sandwich. Â Roasted Turkey, Smoked Bacon, Swiss Cheese, Lettuce, Tomato, and “Sandwich Sauce” on an Artisan baked loaf. Â As good as that sounds, I found this sandwich to be good but not great. Â What really made this sandwich good was the bacon. Â It felt like I had just picked up the best fridge sandwich from 7-11. Â I tried some of The Full Montagu which consists of Roast Beef, Turkey, Swiss Cheese, Cheddar, Lettuce, Tomato and Mustard. Â That sandwich was mediocre at best. Â Nothing to really write home about.