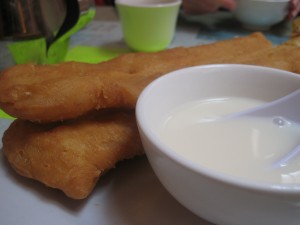 I was on the hunt for jook (Chinese rice porridge) in the Richmond district, but decided to try for a northern Chinese breakfast at Taiwan Restaurant instead.

At 11:30am, we were one of the first customers of the day, and the man at the front of the restaurant was frying up some homemade Chinese donuts.

Taiwan Restaurant has a lengthy 4-page menu with items varying from “Northern Chinese Specialties” to a variety of dry and soupy noodle dishes. They even have an impressive selection of fried breads which are probably made with lard, but who’s counting calories, right?

For 2 people, we ordered the sweet fresh soymilk, a Chinese doughnut for dipping, spicy wontons and Szechuan Hot Sauce Noodles. All came out to about $20.

Soymilk and Chinese doughnut– Disappointingly, the soymilk was lukewarm. One of my pet peeves at a restaurant is lukewarm dishes. However, the doughnuts were fresh. We only ate half of it since it was so big.

Spicy Wontons – The wontons themselves were really good, but it wasn’t spicy at all. The skins were thicker than I’m used to, but it was al dente – the way I like it. The meat was super juicy too. The sauce was basically just soy sauce. I didn’t see any chili flakes or chili oil in it.

Szechuan Hot Sauce Noodles – These were sooo good! The noodles are the kind you usually see in northern Chinese noodle dishes. I don’t think they were homemade, though. I really couldn’t point out every ingredient in the sauce, but it was super tastey. Items I could point out were ground pork, peanut sauce, tons of hot sauce and and green onions. The dish was so big, we had to take it home some leftovers. The downside is this makes terrible leftovers. The noodles soaked up the sauce, making the noodles mushy. Dang!

Taiwan Restaurant seems to be a popular restaurant in the Richmond. They seem to be specifically known for their breakfast/lunch items. I’d like to come back to try a noodle soup.