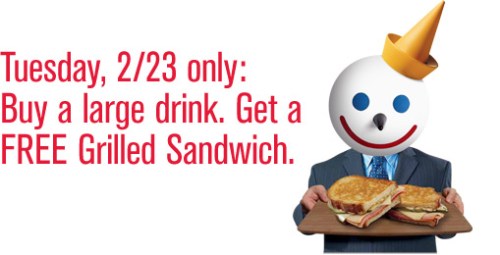 This Tuesday, February 23rd, Jack in the Box is offering a free grilled cheese sandwich to anyone who buys a large drink. Here’s a note from Jack himself:

So Iâ€™ve recently been into things that are grilled. Not like rappersâ€™ teeth or anything. My new Grilled Sandwiches. Thereâ€™s the Grilled Turkey, Bacon & Cheddar with roasted turkey, cheddar cheese and bacon, and the Grilled Deli Trio, with salami, sliced ham, roasted turkey, provolone cheese and pickles. Both served on grilled artisan bread.

I canâ€™t decide which one I like better. Iâ€™d imagine thatâ€™d be like having to choose which of your fraternal twins you like better. Except in that case, one is usually evil.

But back to the sandwiches.

Iâ€™ve decided to give them away for FREE on Tuesday, February 23rd with the purchase of a large drink. One sandwich per person though. So choose wisely.