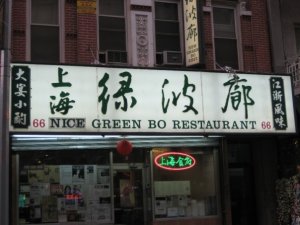 First of all, I wanted to say I LOVE how this restaurant replaced “New” with “Nice.” Too funny.

I was so excited to try Shanghainese food in New York. There’s tons of great Shanghainese places in San Francisco, but I expected NY’s to be better since they have a larger Northern Chinese population.

Our initial plan was to go to Joe’s Shanghai, but then we were told it was way overrated, so we decided to go to Nice Green Bo Restaurant.

The restaurant was packed. Since it was just K and I, they were able to squeeze us at a round table with 3 other parties. That kind of thing doesn’t bother me though. As long as I get good food, I’m good.

Preserved Vegetable and Pork Soup – Totally not what we meant to order. Because of the preserved vegetables, it was way too salty, almost overbearing. The pork was tough as if they were using old, overcooked meat.

Xiao Long Bao – As all real Chinese people should know, you can’t pop the soup dumpling. All those flavors need to stay intact until you put the whole thing in your mouth. Well, to my discontent, every single dumpling in the steamer was popped. It was already sitting in it’s own broth! Truly disappointing.

Stir-fried Rice Cake – Think of this as chewy noodles (much like a mochi) made like chow fun. It’s really easy to screw up this dish. If you overcook it, it gets gummy. If you undercook it, you get the same result. Green Bo actually made it pretty decent. It had the right chewy texture and the flavors were there.

Overall, I was underwhelmed. I have yet to find a Shanghainese place that beats Shanghai Dumpling King in San Francisco. Next time, I’ll try Joe’s Shanghai. 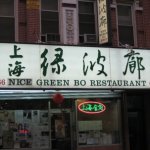 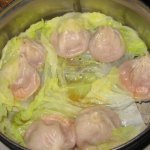 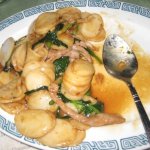