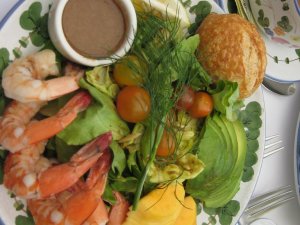 I actually didn’t think the Ivy was as bad as everyone says it is. Maybe it’s because we ate salads and you really can’t screw up a salad.

Upon making reservations, I requested a table on the patio. We were lucky enough to sit right by the fence next to the front entrance. There were 4 of us, but the table only had enough room for 2 people. As expected, the servers were pretentious. I don’t think anyone checked on us during the meal and the busboys didn’t say a word.

We didn’t catch a glimpse of a celebrity until after we left the restaurant. We shopped around Robertson and when we were walking back to the car, we saw Nelly at a late business lunch on the patio. Meh, it was only Nelly. Paparazzi weren’t even at the restaurant that day during lunch.

The 4 of us all had salads and shared a fried calamari as an appetizer. My girlfriends all got the salad nicoise with lump crab meat special which was about $12 each. Daring to be different, I ordered the $28 butter lettuce salad with shrimp, avocado and mangoes. All salads were delish. The dressings were light, ingredients were fresh and portions were huge. I appreciated the generous helpings of shrimp and crab in all our salads.

The Ivy is one of those places you go to just to say you’ve been there. I’m huge on service, so I’d probably not come again. 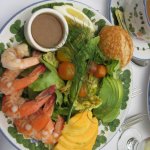 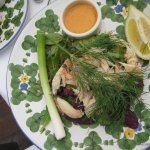 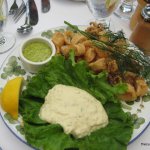 No Responses to “The Ivy – Los Angeles”