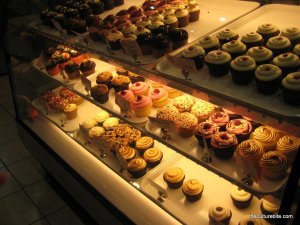 Over the weekend, I drove by this neat little bakery with an impressive display of designer cupcakes in the window and I had to stop by to try one, or three. I was intrigued by the Andes mint cupcake they had at the window, but they were sold out for the day. With the interesting flavors they had to offer, I decided o get 1 lemon meringue, 1 smores and 1 chocolate raspberry.

Maybe because it was the end of the day, the cake wasn’t as moist as other cupcakes I’ve tried at other bakeries. I split each cupcake into fours and the cake just crumbled.

S’mores cupcake – I was very disappointed in the s’mores cupcake. The cupcake consisted of a chocolate cake with a graham cracker crust bottom and a marshmallow frosting. I give Cako credit for being original with the graham cracker lining at the bottom of the cake, but it just didn’t taste like a s’more to me. The frosting was actually crunchy as if the sugar didn’t get a chance to dissolve.

Lemon Meringue – This one is the best cupcake out of the 3. The cupcake was made from a lemon batter with a generous amount of lemon zest, a lemon filling, and a meringue topping. The cake almost tasted like a lemon bar. The meringue was light and fluffy; a perfect match for the sweet cake.

All-in-all, Cako was a satisfactory cupcake shop. What really makes a great cupcake is the consistency of the cake. If it’s not moist, you don’t got it. I give Cako props for it’s originality though. I’d like to go back to try the Andes mint cupcake.

No Responses to “Cako – San Francisco”