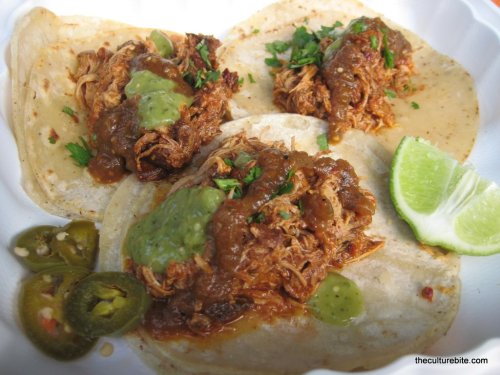 usual lunch spot on Thursdays is the farmer’s market at the Ferry Building in San Francisco.  It’s about a quarter smaller than the Saturday farmer’s market, but still impressive nonetheless. The usual stands on a Thursday are Roli Roti, Namu, Tacolicious, La Palma, Pizza Politana, Capt’n Mike’s, Scream Sorbet and many more. (You may recall my last post on the Namu stand.)

Okonomiyaki – I couldn’t resist, so I ended up ordering the same Okonomiyaki (Japanese pancake) at Namu. So disappointing this time around! It was about 2 inches in diameter smaller than the one I had last week, but it had about the same amount of kewpie mayonaise (sweet mayo)! How gross!

Black Bean Noodles – The special of the day, the black bean noodles, was actually really good. The chewy noodles were topped with a thick black bean sauce with cucumbers, eggplant and green onions.

I’m definitely going to have to venture outside of Namu to see what else is at the Thursday Farmer’s Market. Next week, the Porchetta sandwich at Roli Roti!