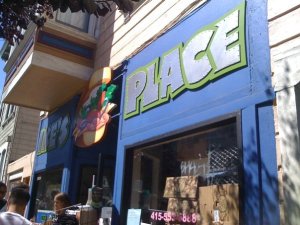 Everybody and their mama has been raving about Ike’s place, and yes it’s worth the hype. I went here one weekend to see what the deal was.

I got there around 12:30, and the line was already 3 houses long. After about 45 minutes, it was almost my turn to place my order and I’ve just received a binder full of sandwiches from the person in front of me, but what’s this? The menu featured over 200 varieties of sandwiches! I was pretty overwhelmed with the array of choices, but I ended up choosing the “Cowboy Curtis” which consists of sliced corned beef, home made poppy seed coleslaw, BBQ, smoked gouda on a freshly baked dutch crunch roll slathered in dirty sauce. (I apologize for the crappy photo. I took it with an iPhone) 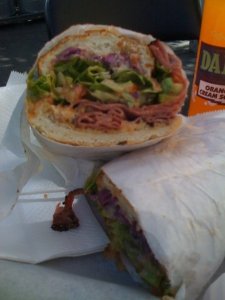 It took another 20 minutes to actually get the sandwich, but it was completely worth it in the end. The sandwich was rich, spicy and wonderfully garlicky. Dutch crunch rolls usually tear up the roof of my mouth, but this one was soft and chewy. Ike’s famous “dirty sauce,” which is their secret house garlic sauce, is even baked into the bread in case the sandwich didn’t have enough flavor.

One of Ike’s famous sandwiches is called Doomsday. This $16 sandwich consists of roast beef, corned beef, pastrami, salami, turkey, bacon, ham, mozzarella sticks, stuffed jalapeno poppers and avocado. I give props to anyone to can finish this sandwich. I could barely eat half of the Cowboy Curtis in one sitting!

For those of you who work in the peninsula, Ike’s opened another storefront in the hallway of an office building. You’ll find Ike’s atÂ 555 Twin Dolphin Drive, Redwood City, CA.